Home » Blog » Where does the environment fit in Cambridge Econometrics’ modelling? 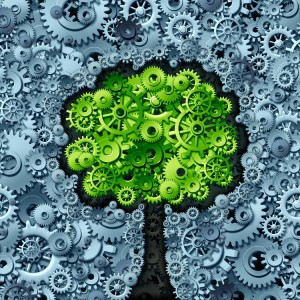 On the thread there was general agreement that mainstream neoclassical economics and its extension, environmental economics, fail to account for interactions between economy and environment, treating the environment as an ‘externality’.

The Computable General Equilibrium (CGE) models based on these theories thus offer only very limited analysis.

The mainstream approach contrasts strongly with theories based on ecological economics, in which the economy fits inside wider society, which itself must function within the physical constraints of the natural world.  Many ecological economists conclude that these constraints put a limit on how large an economy can grow.

Based on work carried out In work in East Asia, I have argued that there are strong parallels between elements of post-Keynesian economics and ecological economics, and recent work by researchers such as Yannis Dafermos, Louison Cahen-Fourot and Marc Lavoie have also shown consistency in approach.

This raises the question of whether Cambridge Econometrics’ E3ME model, which is based strongly on post-Keynesian economics and includes several environmental indicators, could be classified as an ecological economics tool.

On the face of it, the answer is no.  There are very few feedbacks from the environment to the economy in the model, so it could be argued that the environment is again treated as an externality.

There are good reasons for using this limited approach in E3ME: notably data gaps that mean that the degree of uncertainty in ‘damage functions’ would dominate model results.  Ironically, the narrow focus of mainstream economics is at least partly responsible for a lack of research in this area.

There are other, more philosophical reasons, to suggest a more nuanced position. E3ME results include a range of economic and environmental indicators.  The model combines monetary and physical units and does not put economic values on environmental degradation.  Model results are presented as showing complementarities and trade-offs between different indicators, rather than attempting to find a socially or economically optimal outcome.  Furthermore, the agents in the model do not optimise based on purely economic principles (or indeed optimise at all); for example, the power sector model shows early adopters of renewable technologies before it becomes cost-effective for them to do so.

The model is currently being developed to incorporate further feedbacks, including the important links between local air pollution and human health, which will impact on the economy but also be important in their own right.  The land use tool currently being developed will introduce further feedbacks.  And recent results have shown the difficulty in limiting material consumption without reducing rates of economic growth, which could eventually point to a need to limit economic development.

To summarise, the main aim of the E3ME model is to provide a tool that can test policies that aim for economic, social and environmental sustainability – using the best information that we have available to work with.  Like all models E3ME has limitations, some theoretical but in this discussion mostly practical in the form of a lack of understanding in key linkages from environment to economy.

Researchers and policy makers that interpret results from the model must always be aware of these limitations.  More generally, ecological economists are absolutely right to put pressure on all researchers to improve the available data and tools that are used to assess policy.  E3ME is well ahead of most of the other models out there but here is still much to do.