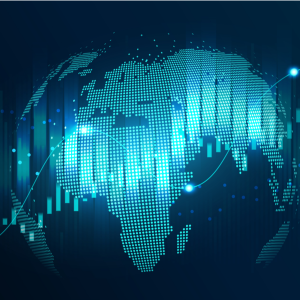 With the latest IMF projections for global growth revised down to 3.6 percent this year and next, Senior Adviser Andrew Sentance considers the factors affecting this new forecast. Will the tensions between the West, Russia and China be a temporary phase, or continue to prevail?

At the beginning of this year, there was a lot of optimism about prospects for the global economy.

The world’s major economies were bouncing back from the pandemic and the resulting lockdowns. Inflation was picking up but the rise was expected to be short-lived.

In January, the IMF was forecasting global growth of 4.4 percent for this year, significantly above its longer-term average of around 3.5 percent.

Over the past couple of months the economic outlook has darkened

The latest IMF projections for global growth published this month have been revised down to 3.6 percent this year and next.

Meanwhile, inflation projections are being pushed up. The latest Office for Budget Responsibility (OBR) forecasts announced in Rishi Sunak’s Spring Statement last month shows this very clearly. Projected 2022 UK economic growth has been revised down from 6 percent last autumn to 3.8 percent. The expected peak for inflation this year has doubled – ratcheting up from 4.4 percent to 8.7 percent. UK consumer price inflation has already hit 7 percent.

Similar adjustments have been taking place for the forecasts in many other countries. Even China – which is normally very optimistic about its economic outlook – has set its lowest growth target for 30 years. Meanwhile, the global inflation surge is already showing up in major economies around the world. US consumer price inflation has hit 8.5 percent. In the euro area, inflation is 7.5 percent but in some countries it is nearly 10 percent: in Spain the latest figure is a staggering 9.8 percent and in the Netherlands 9.7 percent.

The oil price rose briefly to around $140/barrel. Even though the oil price has since settled back to around $100-110/barrel, this is significantly above the $60/barrel we saw around this time last year. Gas prices have risen sharply. Meanwhile, food and other global commodity prices have been pushed up. Wheat prices hit a record high in March with the expectation that exports from Ukraine and Russia would be severely disrupted.

In the UK, the price of a humble takeaway meal of fish and chips has been pushed up sharply as fish supplies from Russia are cut back sharply and other food and energy prices have risen.

The bounce-back from the pandemic

But the Russia-Ukraine war is not the only factor at work raising inflation. The bounce-back from the pandemic has put upward pressure on inflation in a number of different ways – as demand has exceeded supply in many markets. Supply chains have become stretched leading to cost increases for manufacturers. And labour markets have tightened in many countries, resulting in upward wage pressures.

Though wages may be bouncing back from the pandemic, they cannot keep pace with inflation rates approaching double-digit levels, driven by rising energy and food prices. So there is an inevitable squeeze on real household incomes. While better-off households may be able to dip into savings to maintain their spending, poorer households are not able to do so.

Monetary authorities have been caught unawares by the current inflation surge, which is now looking likely to be much stronger and more sustained than was expected a few months ago. In the next 12-18 months, central bankers will be trying to strike a balance between the need to tighten policy to combat inflation and the risk of dampening economic growth too aggressively. Hopefully, gradual interest rate rises will prove effective in achieving this difficult balancing act, but that cannot be guaranteed.

Big shifts in energy and commodity prices create winners and losers across the global economy. Generally, the producers of oil, gas and other commodities will benefit from higher prices and consuming countries will face higher import costs, potentially displacing imports of other products. However, sanctions on Russia, will clearly take a heavy economic toll.  Also, the war in Ukraine will disrupt the supply of food to many countries – including poorer economies in Africa.

An increase in economic uncertainty facing consumers and businesses, due to the heightened level of political tension between Russia and the West, is adding to the cocktail of negative influences on global growth.

We are in danger of returning to the era of the Cold War in terms of the West’s relationships with Russia – and possibly with China too. Most people thought we had left this era behind over three decades ago. But Russia and China now appear set on challenging the world economic order established in the 1990s when most countries in the world embraced an open rules-based world trading system overseen by the World Trade Organisation (WTO).

As the chart shows, the expansion of world trade in the 1990s and the first decade of this century gave a strong impetus to the world economy, lifting the annual global growth rate from just over 3 percent to nearly 4 percent.

However, since the mid-2010s, we have already seen a growing tide of protectionism holding back the growth of world trade – initially focussed on disputes between the US and China in Donald Trump’s presidency.

Other factors are now supporting this anti-globalisation trend – including the Covid pandemic and now the conflict between Russia and the Western powers over Ukraine. The latest IMF forecast already reflects some of these influences. In the 2020s, world trade growth is projected to drop to just over 3 percent, compared to 4.5-6.5 percent in the previous four decades.

And the annual average global GDP growth rate for the 2020s is projected by the IMF to be below 3 percent this decade – again lower than in the previous four decades. (Growth figures quoted for the 2020s are for the eight years 2020-27 which is as far ahead as IMF forecasts are available).

It is tempting to look at recent downgrades to global growth forecasts as a temporary phenomenon. But more fundamental forces are also at work. The boost to world growth from the process of globalisation – which started in the 1980s and gathered momentum in the 1990s and 2000s – has run out of steam. The spirit of global economic co-operation has been replaced by a new period of tension and conflict.

In the late 19th century and early 20th century we saw a previous phase of globalisation and expansion of world trade, known to economic historians as the “First Era of Globalisation”. This era gave way to national conflict and rivalry and ended up with two World Wars. That is a chilling reminder of how damaging breakdowns in the system of world economic co-operation can be.

The world economy is at a turning point, and the question is whether the tensions – between the West and Russia, China, and involving some other developing economies – will deepen, or whether this is a temporary phase which will pass. The jury is out for now, but the risks to the world economy are clear.

Sign up to our newsletter for the latest news, opinions and research insights from around the world.