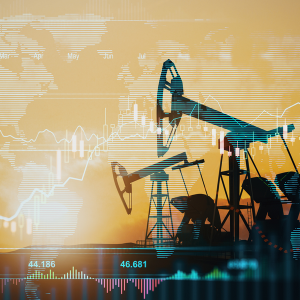 Our latest analysis of high oil and gas prices show the need for policy support, to manage a rapid transition away from fossil fuels and to prevent long-term damage to affected communities. Head of Environment Jon Stenning unpacks the key findings, with a focus on the UK, EU27 and the U.S.

The war in Ukraine has solidified the high oil and gas prices that took root globally in the latter part of 2021, as Russian limits on exports have given way to sanctions including the steady isolating of Russia from global trade.

Many global trading partners, including the EU and U.S., have announced plans to either immediately or over time reduce their dependence on Russian energy imports.

Global oil and gas markets are currently very tight, which has tightened severely the international market for remaining supplies and pushed prices up to record levels.

One key question is how long these high prices will last; a quick end to the Ukrainian conflict seems unlikely, and even if it were to be achieved it’s not clear that it would end Russia’s current pariah status.

This means that the current prices are likely to persist into the medium-term.

What are the impacts of these prices on the global economy?

To understand the potential impacts of these prices, we designed three scenarios to be explored in our global macroeconomic model, E3ME;

1 There is a sharp increase in investment in alternative technologies

In our analysis, this is most evident in power generation, where investors switch away more rapidly from well-established technologies such as combined cycle gas turbines (CCGT), and towards low carbon alternatives including wind (offshore and onshore), solar and nuclear. This provides a boost to GDP.

Consumers experience high prices both directly in the form of paying more for transport and heating fuels, and indirectly through paying higher prices for goods and services, reflecting increases in their input costs. These higher prices mean consumers are getting a smaller volume of ‘stuff’ for their expenditure, and puts downward pressure on GDP.

3 There are changes in trade patterns

In fossil fuel importing countries, non-fuel imports are foregone in favour of more expensive oil and gas imports, while in fossil fuel exporters the volume of fossil fuels decreases (as demand falls), but the value of these exports in fact increases as, at least in the short term, the price increase outweighs the demand response.

The interaction of these three impacts lead to the overall trajectory in GDP seen in the figure below. 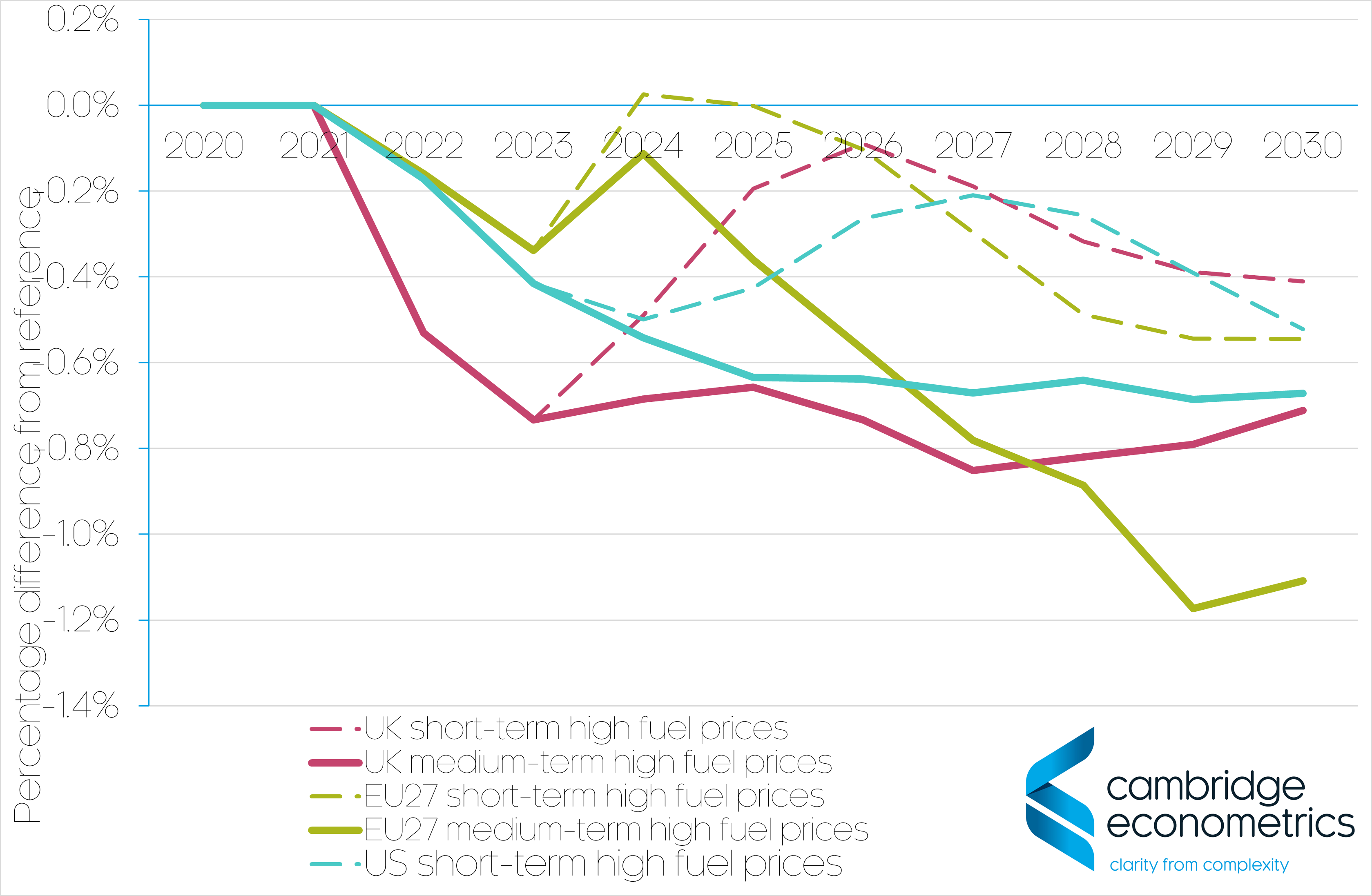 The investment stimulus effect mitigates negative impacts in the short term; in the case where the oil price shock is also only a short-term impact, this means that GDP is only 0.6% lower in Europe, even though this region is more exposed to the negative side of fossil fuel price shocks than the U.S. and UK (both of which have larger domestic fossil fuel industries), as shown in the figure below.

However, the investment stimulus in the U.S., in particular, is small, as the increase in investment in new technologies comes at the expense of continued investment in fossil fuel industries which was otherwise expected to take place. 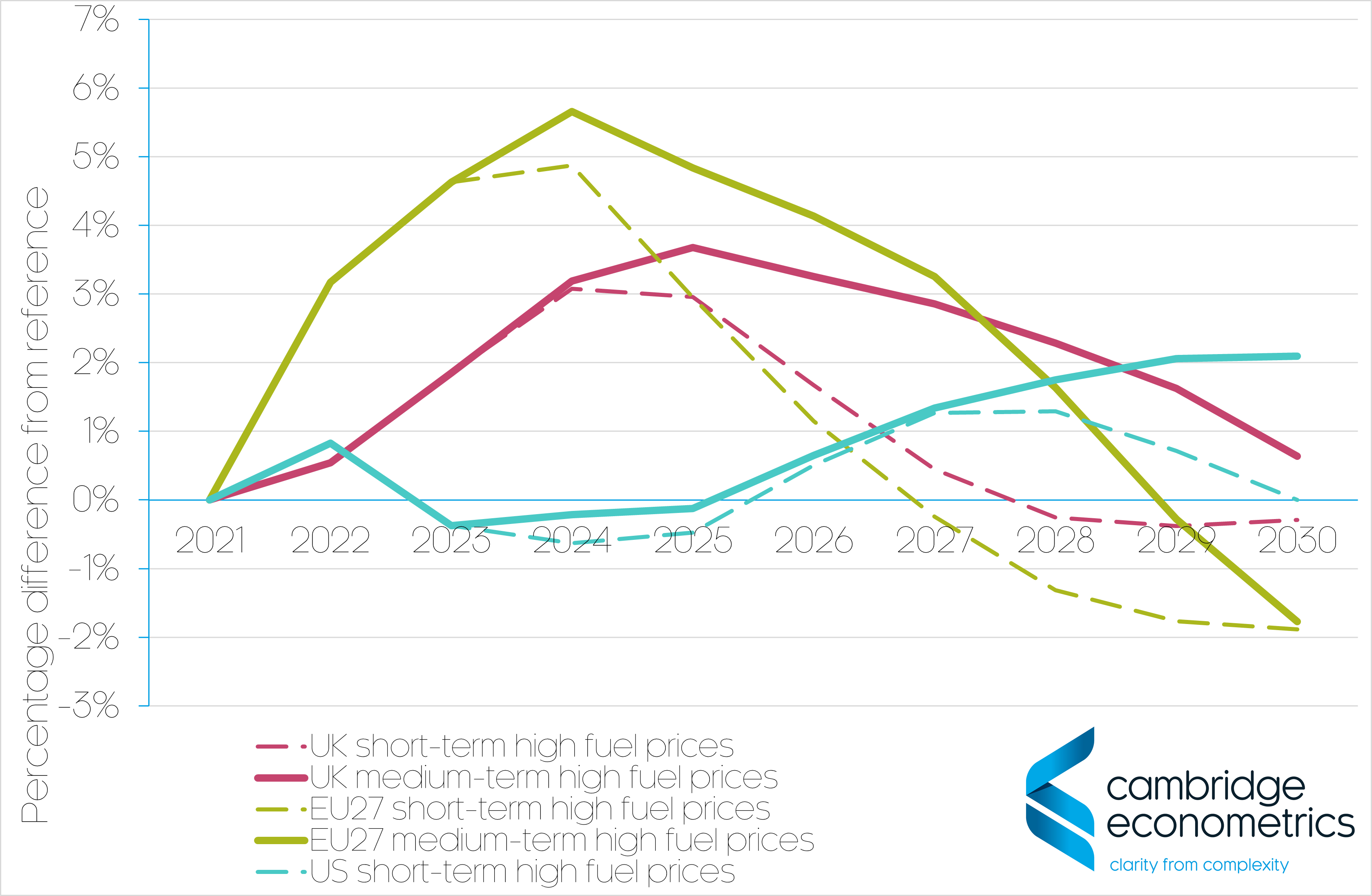 In all scenarios consumer expenditure is eroded as a result of having to spend more on fossil fuels, and therefore less on other goods and services.

Although additional economic activity in the construction sector (linked to investment) and domestic fossil fuel industries (most obviously in the case of the US, which has a large domestic fracking industry) counteracts this to some extent, net impacts on consumer expenditure are still negative across all three regions.

Trade effects are also pronounced – with sustained high fossil fuel prices, energy exports from the U.S. and UK fall towards the end of the period of high prices, as reduced demand more than outweighs the higher unit prices achieved by these exports.

As fossil fuel prices fall back towards long-term levels, because the switch away from fossil fuels has been ‘baked in’ by investments in alternative technologies, demand for these fossil fuel exports falls substantially – by more than 20% in the U.S., and 12% in the UK.

This brief analysis shows that sustained high fossil fuel prices will cause damage to western economies; the precise scale of impact depends upon both the length of the fuel price shock, and the speed of adjustment (in terms of adopting new technologies and shifting demand away from fossil fuels).

However, these impacts are long lasting; GDP remains lower in all of these countries to 2030 and beyond, even when the prices of fossil fuels returns to ‘normal’ levels by 2026, as a result of economic scarring from the initial high prices.

This highlights the need for policy support, to manage a rapid transition away from fossil fuels and to prevent long-term damage to affected communities.

Sign up to our newsletter for our latest news, opinions and research insights from around the world.