Preparing for the economic impacts of natural disasters in Europe: 6 key report outcomes 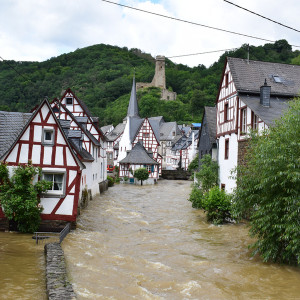 Floods, earthquakes, droughts and windstorms – recent weeks have demonstrated that these disasters are likely to become more frequent and more severe across Europe. Our recent research, commissioned by the ESPON (the European Spatial Planning Observation Network) and delivered by Cambridge Econometrics as part of a bigger consortium, has revealed which European countries and regions are the most severely hit by natural disasters.

As these types of events are anticipated to become increasingly common given global climate trends, it is worth considering what short- and long-term effects the disasters will have on the economic performance of European countries and what actions might be done to mitigate the negative impacts of these disasters.

Our research looked at four major natural disasters – droughts, windstorms, floods and earthquakes –  studying: the frequency of these events, their regional distribution across Europe and the individual and cumulative economic impacts on the European regions.

The work revealed useful insights into the direct and indirect damage costs of natural hazards as well as the spatial distribution of these costs across Europe.

But how can policy makers respond? The findings show that  policy makers should consider the total economic impacts of the occurring natural hazards when developing their Disaster Risk Management (DRM) and Climate Change Adaptation (CCA) measures.

Strong indirect economic impacts, such as the disruption of economic activities on the supply chains across regions and industries, show the importance of supply chains in distributing the economic impacts from directly impacted regions to the “economically” close, but directly not affected regions. Our approach considered production losses and supply chains impacts, but not the potential interruptions of critical physical infrastructures (such as harbours, airports, bridges, the Trans-European Transport Network, etc.) – consequently, the real potential indirect losses could be even higher than assessed in our study. Therefore, policy makers should increasingly include all these indirect factors in their risk assessments.

2 More sophisticated measures must be developed to mitigate natural disasters 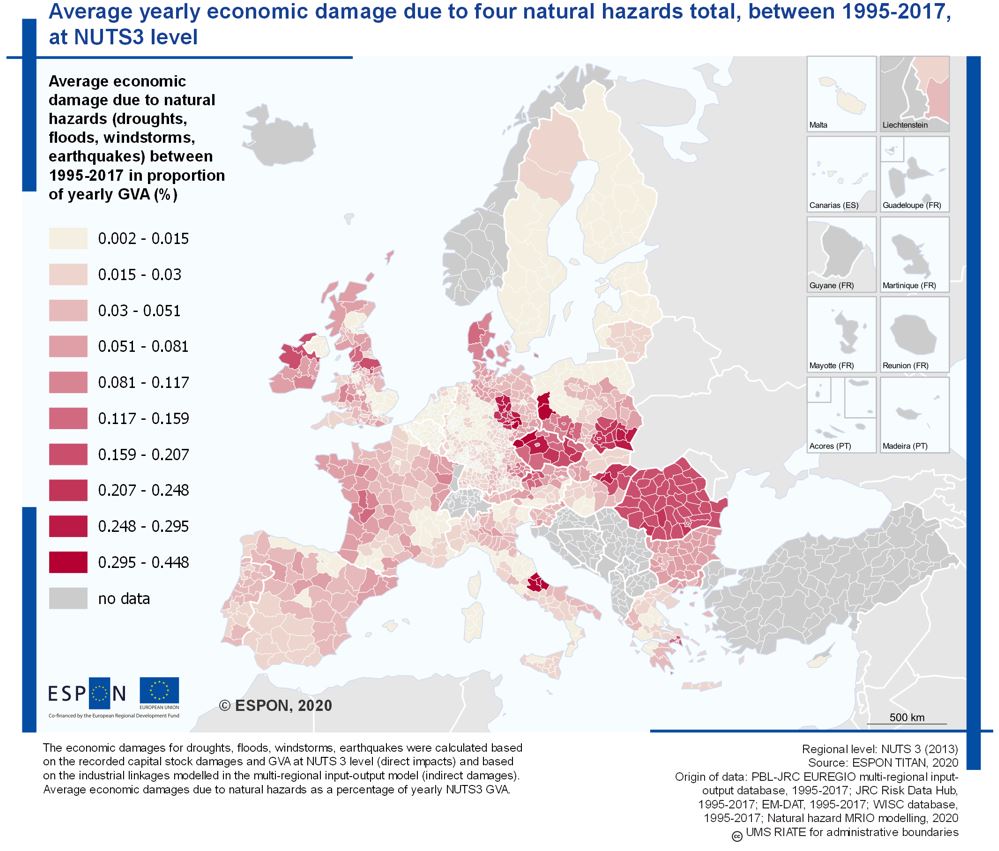 Heavy earthquake events, despite being rare, tend to result in significant economic losses compared to the other event types. The similarities in the patterns of the economic impacts call for an even stronger consideration of vulnerabilities in value chains in risk assessments (rather than focussing on a single hazard and its intensity) as well as generating synergies among DRM (Disaster Risk Management) measures for different hazards.

4 Research projects should be used more strategically to support at a regional and local level, in order to plan for total economic impacts

Regions and the local level should be supported in using research projects more strategically for DRM (Disaster Risk Management) and CCA (Climate Change Adaptation), to be able to better account for total economic impacts – including both direct and indirect losses – of the occurring natural hazards.

5 Poorer countries must put their own measures in place to mitigate the effects of natural disasters, supported by regional planning and local action in disaster risk management

Fortunately, it is not the case that poorer countries are more likely to be hit by natural disasters than richer countries – albeit the type of the most frequent event vary from region to region, the overall frequency of such events does not differ between poor and rich countries.

However, considering the indirect economic impacts and regional distribution of those impacts, countries that are hardets hit by natural disasters are are typically poorer and their economies rely more heavily on activities such as agriculture, the food industry and manufacturing activities.

These countries are even more recommended to develop their own measures to mitigate the effects of these events. However, the institutional systems and infrastructural endowments of poorer countries tend to be less equipped to prepare and protect against the impacts of a natural disasters. This is also apparent through higher human cost from natural disaster events. Regional planning and location action in disaster risk management is therefore also recommended alongside national mitigation.

6 It is worthwhile carrying out more frequent, sophisticated and extended local data collection on the natural disaster events, especially when it comes to indirect damages

Instead of the centrally collected and maintained databases, local data collection on natural disaster events should be carried out more often, especially when it comes to indirect damages.

Development plans should include:

As the world faces increasingly complex challenges due to climate change, it is important that European countries consider a more granular natural hazards-related damage data and reporting, including the distinction between direct and indirect damages to allow for a more sophisticated approach in economic modelling.