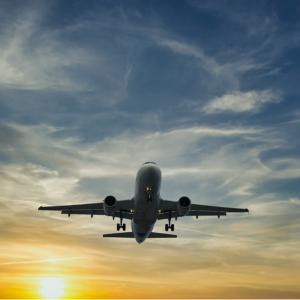 Richard Lewney, Andrew Sentance and Jon Stenning share their response to the Autumn Budget and Spending Review. They argue that the OBR reveals the truth of the British economy, projecting poor macroeconomic performance, and that the latest energy tax measures give little confidence that the government will ever raise taxes on carbon.

If you listen to a Budget speech – any Budget speech – you are listening to a propaganda statement on behalf of the current government. So, we need to sweep aside the rhetoric from Rishi Sunak’s Budget statement this afternoon.

He made some very good announcements on skills, transport and regional support. However, the Budget was poor in terms of its commitment to the transition to a greener economy.

But the projections from the OBR reveal that all the rhetoric about a transition to a high productivity, high wage economy – from Rishi Sunak, Boris Johnson and their colleagues – is a sham.

Economic growth will be very strong this year and next, clawing back a lot of the lost output in the pandemic. But the rate of GDP growth when that post-pandemic growth surge subsides will drop to around 1.5 percent. As the chart shows, this is a very disappointing outcome for the UK economy. The 2020s is likely to see the worst peacetime growth performance since the 1920s – a century ago. 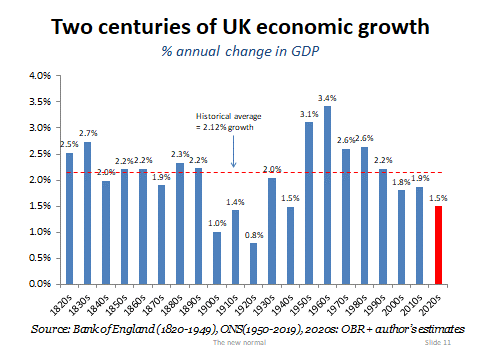 Since the financial crisis most western economies experienced a growth slowdown. This was driven by slow productivity increases – and appears to be continuing after the pandemic. Economists are not very good at analysing productivity slowdowns, but the most likely explanation is a lack of investment and the shift towards lower productivity-growth activities in the services sector.

Other factors which we observed hitting productivity growth in the 1970s will not help either – in particular energy price shocks and inflation.

In addition to weaker economic growth, the OBR estimate that the level of output will be around 2 percent below the level expected before the pandemic, when we get to the mid-2020s (2024/25).

So essentially the prospects for economic growth now look worse than before the pandemic, and this contrasts with the upbeat Rishi Sunak narrative in his Budget speech.

Of course, the future is unknown territory. But it is hard to see the measures which the Chancellor has announced today changing the dials for the UK economy. Looking to the medium-term, governments need to plan on the basis of 1.5 percent growth, not 2-2.5 percent which might have been the previous norm.

The Chancellor’s talk about a high productivity, high growth economy is pure rhetoric. But any measures that the government takes now to boost productivity growth will take decades to have an impact. The more immediate reality is that the UK will be stuck in the slow growth lane once the bounce-back from the pandemic has run its course.

It’s a disastrous own goal to cut Air Passenger Duty on domestic flights, which are highly carbon-intensive and for which there is a reasonable surface travel alternative.

It was not surprising that fuel duty was frozen again, given the recent jump in oil prices, but the vanishingly small likelihood of the government ever grasping that nettle was revealed by the Chancellor’s bragging about how much car drivers had saved thanks to frozen fuel duty over the past decade.

What we need are higher carbon prices accompanied by measures to support less use of fossil fuels, notably major renovation of housing. But that would require a long-term plan, to which budgets seldom pay more than lip service.

A mitigating measure could be compensation in monetary terms to poor households facing higher energy bills due to a higher carbon tax – this could have been introduced today as a short-term measure to combat the regressive impacts of current high gas prices, which few would have argued against, and later extended as desired.

It’s also worth noting the paradox that last week’s HM Treasury Net Zero Review emphasised the ‘tax at risk’ from lower fuel duty receipts, while the government continues to cut those receipts in real terms by freezing the rate of duty.

Sign up to our newsletter for our latest news, thoughts and collaborations.