Home | Blog | Carbon-neutral steel-making: is it a possibility?

Carbon-neutral steel-making: is it a possibility? 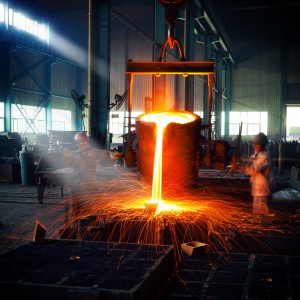 Quite literally, steel is the backbone of a modern society. Unfortunately, the production of steel contributes significantly to human-made climate change.

It is very unlikely society will cease to demand steel, so it is important to figure out how the iron and steel industry can be incentivised to employ low-carbon technologies.

Cambridge Econometrics has incorporated a series of models of technology diffusion (FTT) which are applied to a range of different energy sectors.

The FTT models are based on innovation theory and evolutionary dynamics. FTT:Steel is the latest addition to the series and with it we can assess questions such as:

Can we sensibly decarbonise the iron and steel industry? What technologies would emerge as a result of policies aimed at climate change mitigation? And not entirely unimportant, what are the impacts to the economy when these sorts of policies are implemented?

FTT:Steel can also be used to investigate questions related to resource efficiency, raw material extraction, and circular economy among others.

The steel industry is highly carbon-intensive

The pathway to facilitate this change, however, is not.

The second-most dominant steel-making technology consumes electricity almost exclusively and uses steel scrap as feed material. The added benefit here is that there is no need for downstream processes, such as unearthing the iron ore and subsequently reducing it to metallic iron.

Yet, this is not the answer to decarbonise the steel industry. In theory steel is fully recyclable, but in practice it can be difficult due to contamination with other metal scrap (e.g. copper) and the use of coatings on steel products (e.g. zinc-based coatings).

More importantly, steel demand is projected to outweigh scrap supply up to 2050 (based on Pauliuk, et al. (2013) and own calculations). This means alternative steel-making routes are needed.

What are the alternatives?

The abovementioned technologies reduce emissions to some degree but have their limitations.

Bio-based steel-making is essentially emission-free when the take up of GHG by trees is considered, but in conventional processes it cannot replace fossil resources fully and then there is land-use change and land competition with agriculture that should be considered.

Lastly, CCS/U is often mentioned, but geological storage capacity is limited and scrutinised by the public.

Then there are two further processes in research phase at the moment:

Both are free of direct GHG emissions, but emissions may occur elsewhere during the production of hydrogen or the generation of electricity.

How do policies affect technology uptake?

Various policy pathways can be pursued to bring about decarbonisation (excluding demand-side policies) these are designed to either incentivise low-carbon technologies or to penalise carbon intensive technologies. Examples of the former are subsidies on capital investment costs or the use of specific energy carriers. In the latter case, carbon taxes or regulations and even the phasing-out of specific technologies could be options.

The figure below shows the effects of several policies on the diffusion of technologies. When no policies are implemented (panel a of figure 1), the current most-used steel production routes remain dominant, while only small-scale market penetration can be observed for a relatively new, less carbon intensive production method in three decades from now.

A carbon tax will affect the most carbon intensive routes (panel b). Investors will be looking for new technologies that can avoid the extra burden a carbon tax poses. One such route already exists and it involves the recycling of steel. However, its rise to market domination will push other novel technologies out of the way. Why is that a problem? Steel recycling is inherently a low carbon, less energy intensive steel production pathway, but as stated before, the scrap supply is limited.

So, something else is needed to promote low-carbon, primary steel production. Instead of penalising carbon intensive technologies, the focus should shift to promoting novel, low carbon technologies. Subsidies on capital investment and on hydrogen and electricity consumption, in conjunction with a kick-start policy of such technologies could help. Panel c does show greater uptake of novel technologies compared to the carbon tax, but emissions do not decrease. This can be attributed to less of the investments flowing into secondary steel production.

So, subsidies alone are unlikely to change the locked-in position of the two most dominant technologies. How would technology uptake under a combination of the two preceding policies look like? Panel d shows that we again see a dominant position of secondary steel-making, with more additions of novel, low carbon primary steel-making at the cost of present day’s dominant primary steel-making route. Greater emission reductions can be achieved with the combination of technology-push and market-pull policies, than either alone.

In all of the preceding scenarios we observed that the conventional blast furnace – basic oxygen furnace route still holds a prominent position in the global steel market. What would happen if we apply regulations on this production route in conjunction with the previous policies? Panel e of figure 1 shows that diffusion of novel, low carbon technologies is greater and there’s more secondary steel-making at the expense of regulated technology. Hydrogen-based steel-making especially gains momentum compared to the other scenarios and this is due to the BF – BOF route being regulated. 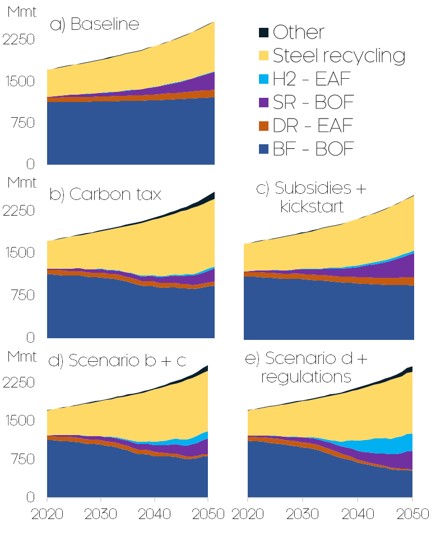 How does this affect emissions and the economy?

Of course, enacting these policies with the purpose of altering the course of technology uptake will have environmental and economic consequences, which are shown in Figure 2. The carbon tax policies are most effective in lowering emissions, while the subsidies along with a kick-start policy do little in terms of emission reduction. However, when used in combination there seems to be a synergy. The addition of regulation will lower emissions even further as it creates more space for low-carbon technologies.

Figure 2: Differences in emissions, steel prices, and GDP compared to the baseline as a result of the enacted policies.

Economy-wise, the carbon tax policies increase the global steel prices by approximately 50% by 2050. As carbon taxes rise, so too will the costs of steel-making via carbon intensive technologies. This affects GDP as all steel-containing products will become more expensive.

However, a rise in GDP is noted between 2025 and 2030 which is caused due to the steel sector investing in new technologies (and all other sectors affected by the carbon tax) to avoid having to pay for the carbon taxes.

However, the decline in GDP could be negated if governments feedback the carbon tax revenue to the economy.

So, is carbon-neutral steel-making possible?

As we have seen using Cambridge Econometrics’ latest addition, FTT:Steel, it’s very likely that policy intervention could influence technology uptake in the steel sector and thereby cut carbon emissions. The costs to the economy are small and could be negated by carbon tax revenue recycling.

However, decarbonisation is not as simple as imposing a carbon tax (and this is a finding that applies more widely).

Complete decarbonisation of the steel sector would require more stringent policy portfolios than discussed in this blog. At least with the addition of FTT:Steel we have increased our analytical power when it comes to policies related to the steel sector.