This week the UK government announced a ban on all sales of conventional petrol and diesel vehicles in 2040. This move sends a clear statement of intent to EU policymakers, consumers, manufacturers and investors, but it is what happens in the intervening years that is critical.

Phil Summerton, Managing Director of CE, says “The real benefit of this announcement, and the similar ban in France, is that it allows the EC to set CO2 standards for new vehicle emission rates in 2025 and 2030 that support a trajectory towards ultra-low emissions vehicles by 2040. The carbon emissions legislation which kicks in ahead of the ban will encourage the industry and governments to rise to the challenge.

It also sends a clear signal to investors. By 2040, all sales in France and UK, which currently represents around 35% of the European car market, will need advanced powertrains – and Germany is going the same way. Irrespective of other policies, investment in battery technologies must now be at the heart of automotive company strategies.”

Fuelling Britain’s Future, research undertaken in 2015, shows clear economic benefits of moving to electric vehicles. Using a scenario where EVs make up 70% of new vehicle sales by 2040, it shows: 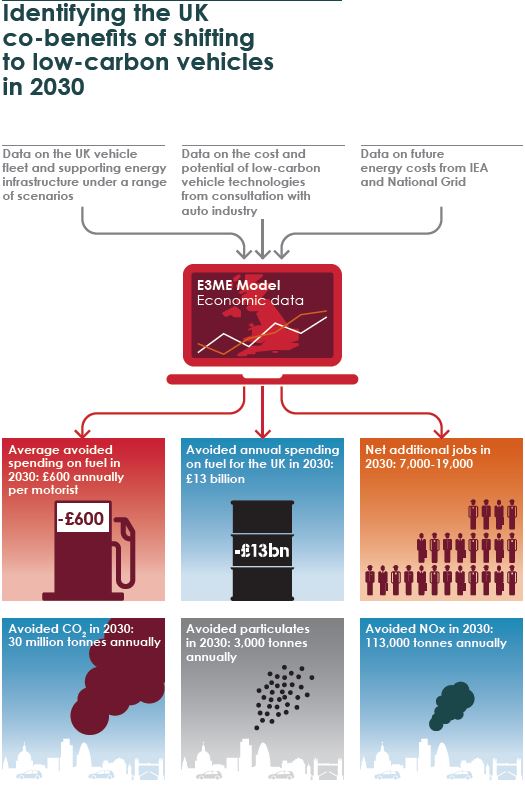 Is the 2040 timeline ambitious enough?

This move by government guarantees huge local air quality improvements, carbon savings and economic benefits and some have questioned why the ban is not being introduced earlier. The share of low and zero-emission vehicles will rise rapidly in any case, supported by European legislation, as electric vehicles become more attractive to consumers with costs falling and battery range increasing. 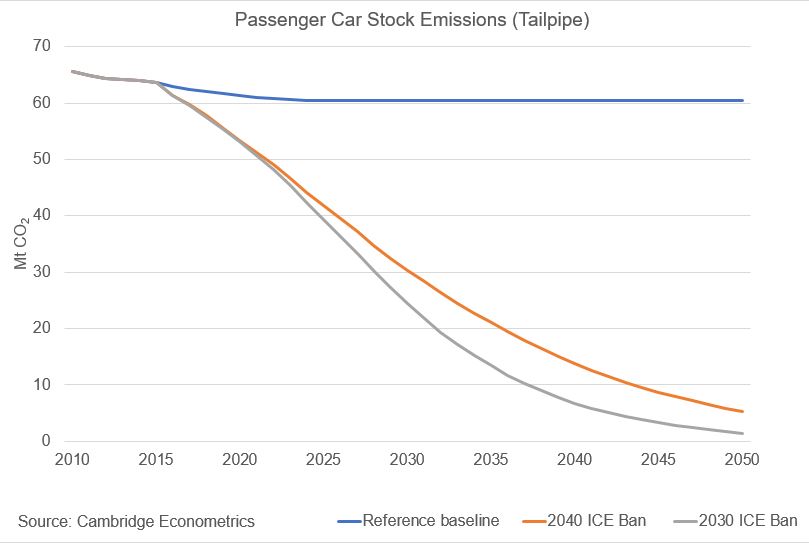 It could be argued that the additional 5-10MtCO2 carbon savings each year is worth bringing the ban forward to 2030. However, the faster the transition, the more rapidly the transition challenges would need to be addressed by policy makers.

The transition to ultra-low emission vehicles is not comparable to the launch of other technology products, such as smartphones – as some commentators have alluded to. The infrastructure, employment and energy system challenges are considerable.

Increase in electricity demand of only 10% 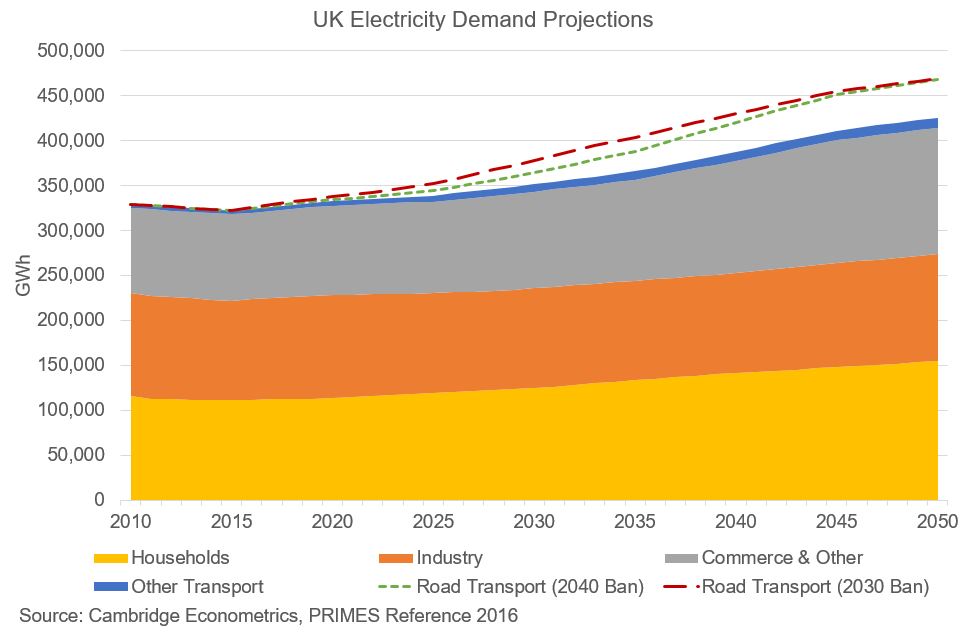 Instead the concern should be focussed on delivering electricity at peak times of the day. Commuter patterns suggest that many drivers will charge their cars after returning from work exacerbating the problem of meeting peak load demand. As the UK’s electricity system moves towards intermittent renewables there could be power outages as the grid struggles to meet peak demand.

Evidence from our research with Element Energy on the French electricity system suggests that the challenge could be overcome through smart charging, but this requires smart charging infrastructure to be installed alongside the roll-out of EVs. Smart charging would also help reduce the investment required to support the distribution network in providing the additional power to homes at peak times.

For a rapid uptake of EVs, in line with that required to meet the government’s 2040 targets, investment in charging infrastructure needs to be accelerated.

For EV charging infrastructure capabilities to meet society’s needs, a determined and joint effort between industry, government and civil society is required. Electricity grids will need to be reinforced and modernized but these costs could be reduced if smart charging initiatives are rolled out to balance peak electricity demand. 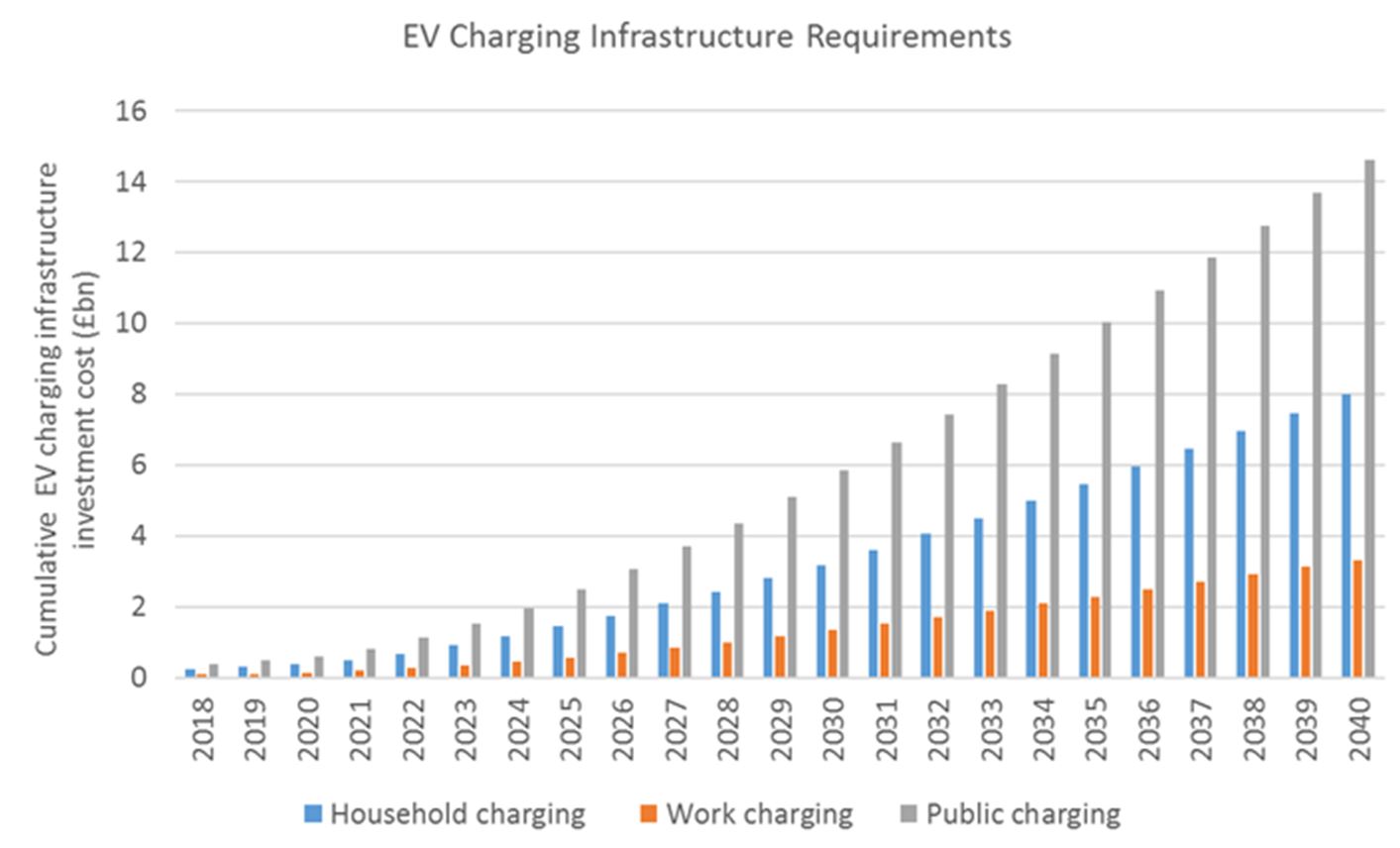 The pathway to 2040 is more important than the end point. Recent remarks from Greg Clark have identified the Automotive Council, a partnership between the public and private sector, as the model for stakeholder partnership and the development of industrial strategy.

Over the next decade, this institutional arrangement will be put to the test: can the UK manufacturing sector rise to the challenge of developing and manufacturing ultra-low emission vehicles? Will inward investors be encouraged to set up shop here, despite the uncertainties caused by Brexit? Will the manufacturing sector and supply chain have enough trained individuals to deliver the parts and finished product? How can specialised and skilled labour transition from manufacturing internal combustion engines to advanced powertrains and how should government support such a transition? Whether and how to tax motorists to recoup lost fuel duty revenues?