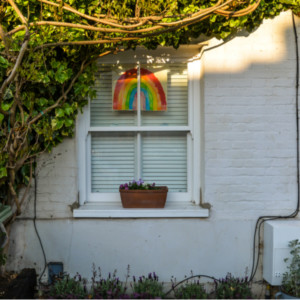 Senior Adviser Andrew Sentance shares his thoughts on the latest GDP and inflation figures. Despite the announcement of a new national lockdown in England at the beginning of January, we have had some encouraging news about the resilience of the UK economy over the past week or so.

When the first national lockdown was imposed at the end of March, the output of the UK economy dropped by around 25 percent – before bouncing back as restrictions were eased. By October we had clawed back three-quarters of the loss of production (Chart 1). Unsurprisingly, the November lockdown caused a further drop in output, but on a much smaller scale. The output of the UK economy in November was 2.6 percent below its level in October. The total shortfall on the pre-pandemic level of economic activity in February was around 8.5 percent – just a third of the output drop seen in the first national lockdown in April. 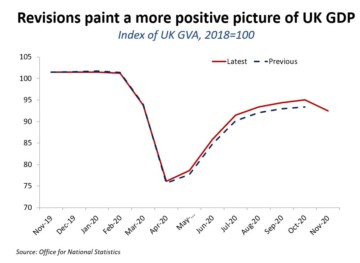 This was a much better picture of the UK economy in November than most economists were expecting, partly because data from earlier in 2020 had been revised upwards (Chart 1). It also reflects the fact that the November lockdown was milder than in the spring and early summer. Schools remained open and measures were targeted on sectors of the economy – mainly in the services sector – which encouraged social interaction, especially the hospitality sector (restaurants, pubs and hotels). Manufacturing and construction output held up well, as these sectors were allowed to operate more normally in the November lockdown.

The other key ingredient explaining the smaller impact of the November lockdown is the way in which households and consumers have adapted to restrictions. Some commentators have suggested this was due to the public not complying with regulations. While that may have been a factor, reported Coronavirus cases dropped by nearly 45% between mid-November and early December. This was a more significant fall in reported infections than we saw in the Spring/Summer lockdown.

A more important factor explaining the smaller than expected drop in UK economic activity in November is that businesses and households built on their experience of the earlier lockdown to go about their business without too much disruption. By autumn 2020, households had become much more familiar with online retailing and working at home. Many businesses had adapted their processes and procedures to cope with the lockdown earlier in the year.

Economists describe this as “learning by doing” – previous experience supports the process of innovation and adaptation.

What about the expected double-dip recession?

This experience of the November lockdown gives some hope that the economic impact of the current period of lockdown – which will probably last into March – will also be much milder than we saw last spring and early summer. The National Institute of Economic and Social Research (NIESR) recently estimated that UK GDP will drop by 3.4 percent in the first quarter of this year after growth of 0.9 percent in the final quarter of 2020.  From a technical perspective, this means that the UK would avoid a double-dip recession, which many economists were expecting just a few weeks ago. Also, these fluctuations in GDP are very modest compared to the gyrations we saw in the first lockdown in spring/summer 2020.

Inflation figures released today confirm this relatively optimistic assessment. Headline inflation remains low – with the UK Consumer Prices Index (CPI) just 0.6 percent up on a year ago. But this reduction in inflation is heavily reliant on the reduction in VAT (20 percent to 5 percent) introduced for the hospitality sector by Chancellor Rishi Sunak in the summer (Chart 2). Without this VAT cut, inflation would be about 2 percent, according to the estimates from the Office for National Statistics (ONS). 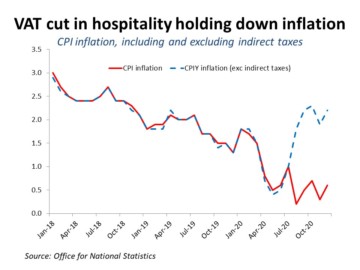 As some of the support provided to businesses unwinds, we should expect inflation to unwind from its current low level. But there is no serious inflationary threat from the recovery of the economy from the lockdowns we have experienced. The Bank of England is well placed to take spending power out of the economy if necessary to counter any inflationary danger. Interest rates can be raised and QE (Quantitative Easing) withdrawn.

In some ways, a rise in inflation would be a nice problem for the economy to have. It would be a sign we are returning to some king of normal economic conditions. That is not grounds for excessive optimism – more hope that the dawn is arriving after a turbulent and stormy night.

Keep in touch with Cambridge Econometrics by following us on Twitter and LinkedIn.