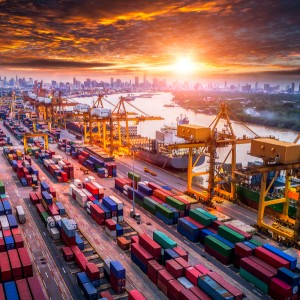 I noted that simulations with Cambridge Econometrics’ post-Keynesian E3ME model would not necessarily agree with the mainstream models.

However, I also said that we needed a better understanding of trade to inform the impacts of trade policy. This post starts to do that.

First, let’s cover three important trade issues. These are all ‘supply-side’ issues, meaning that they affect the efficiency of production.

Comparative advantage suggests that countries produce what they are most suited to producing, relative to everyone else.

As I noted in the previous post, the main disagreement among post-Keynesian economists about comparative advantage is whether it was always a useless concept or just useless now.

In contrast, being able to produce bulk goods more cheaply is very much a real-world phenomenon. If large production lines are broken up, then average costs will increase – or to put it another way, more inputs will be required for each unit of output.

Degree of competition and innovation

Free trade is typically a way of opening domestic markets to competition. A loss of competition may encourage companies to raise prices and profit margins. It may also discourage innovation, which is usually seen as a long-term driver of productivity and economic growth.

However, the key question is does any of this matter? We live in the real world, not a fantasy model world. Unemployment exists. Companies generally produce as much as their customers demand, not as much as they can. There is not a fixed money supply.

In economic terms, the level of production (and employment) is determined by the level of aggregate demand, which is less than the maximum amount that the economy can produce, i.e. the level of potential supply.

Although probably not, there are some merits to this argument. A better way to boost production levels and employment would be to implement policies to boost aggregate demand.

In the UK this certainly means ending austerity and could mean increasing government spending on vulnerable groups. The view has therefore gained traction on the political left.

In addition, there is an argument that looser trading arrangements increase the scope for demand management policies: for example, if the UK left the EU single market then it would have more freedom to provide state aid to specific industries potentially preserving jobs.

However, these arguments tend to look at the demand side in isolation: after all, if potential supply is higher, then there would be more scope to boost demand without hitting supply-side capacity constraints (i.e. inflation).

Overall, it seems likely that an end to austerity would be more beneficial to the UK than any likely changes to its trading arrangements. It seems reasonable to prioritise that as a policy. The relevant policy question that we should be discussing is whether membership of the EU, its customs union or single market really prevents such action.

And on the modelling

A final point on trade modelling.

Standard trade models rely on theories of comparative advantage but assume no economies of scale and have nothing to say about innovation.

They also mistakenly assume that production = potential supply, rendering the entire discussion above rather pointless. They come out on the wrong side of almost every point I have made. In fact it is difficult to see what relevance these models have in the debate.

Cambridge Econometrics’ modelling with E3ME is much more advanced here but also faces limitations. E3ME accepts that production <= potential supply and does not rely on theories of comparative advantage. It also allows for economies of scale, but the aggregation of sectors (70 in total) is not detailed enough to capture specialisation effects.

The competition-innovation effects of trade in E3ME are work in progress and will form an important addition to the model. Here the key issue is data, especially on estimating the degree of existing competition in a sector. Initial results suggest that there could be a modest impact on long-term growth through this channel. But more on this to come later this year.