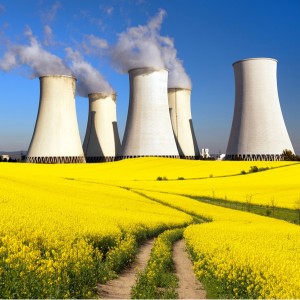 Nuclear energy generation carries risks, but we might just need it for a sustainable future, says Economist Bence Kiss-Dobronyi.

As the urgency to tackle climate change increases, nuclear power could be a prime substitute for fossil fuels. Nuclear power plants produce no CO2 emissions — a potent greenhouse gas — which is the main driver of the climate crisis.

They are based on a mature technology, with a history of operations and maintenance across the world and extensive safety standards.

They are mostly fuelled by uranium, from which we have at least 130 years of supply(1) (this is likely to increase with new technologies and exploration).

We used to love nuclear. Just look at the animation below: see how the ’70s and the ’80s nuclear power plants were popping up around the world?

Of course we all know what happened: Windscale in 1957, Three Mile Island in 1979 and Chernobyl in 1986 (and its clean-up is still ongoing). But this was already a time when protests against nuclear power were widespread.

Public opinion was against nuclear energy and so projects were abandoned and investments in new nuclear energy capacity fell.  Italy even held a referendum on nuclear power and subsequently phased out nuclear capacity in 1990. 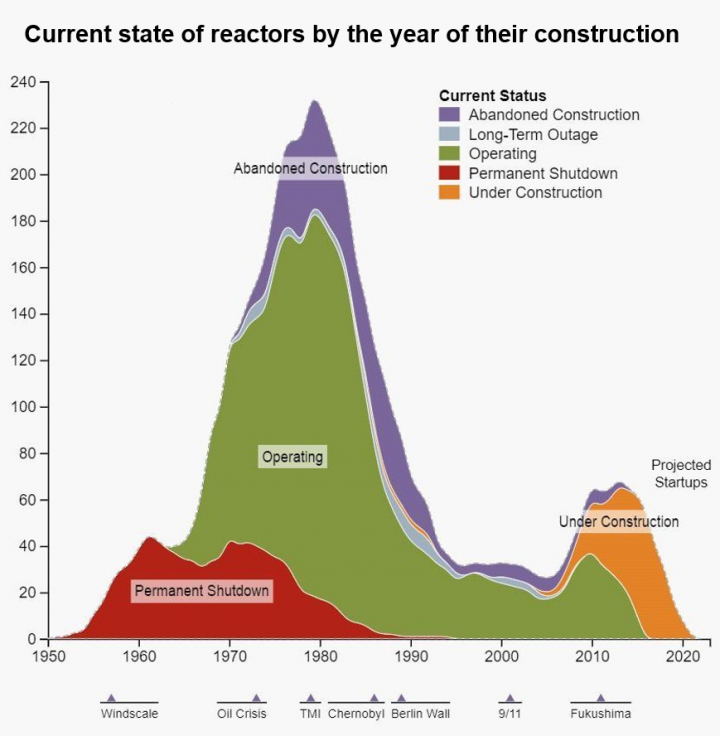 This can be clearly seen on Chart 1 (source: Global Nuclear Database of the Bulletin of Atomic Scientists here), which shows the current status of reactors based on the date when their construction started. Most reactors were built in the years 1970–1985 and the reactors built in this period remain the majority of operable nuclear reactors.

Let’s consider this for a moment. Looking at the red area it is evident that reactors eventually are closed down for good. The operational life of a reactor used to be 40 years, now it is more likely to be 50 or more.

Despite this longer operational lifespan we will soon face a moment when we will need to decide whether we should invest in new nuclear capacity or not.

Protests often focus on the public safety aspect of nuclear power and while the risk is considerable its likelihood is relatively low. Since 1990 there are about 400 nuclear power plants in operation and known incidents — with the most important being the Fukushima disaster— were few. While other energy industries such as the oil upstream experience fatal accidents many times annually.

Of course nuclear kills most of its victims through insidious ways. Radiation, contamination of water sources, diseases slowly creeping in.

Deaths resulting from the latent effects of nuclear accidents are many times that of direct deaths. But the same is true for climate change and air pollution caused by fossil-based energy production (see Chart 2 below).

Indirect deaths from fossil-based energy generation are caused through respiratory and cardiovascular illnesses, emphysema, asthma, malaria, dengue, malnutrition and natural disasters. The difference? For these there does not need to be an incident. It is simply the result of the business as usual use of fossil fuels. 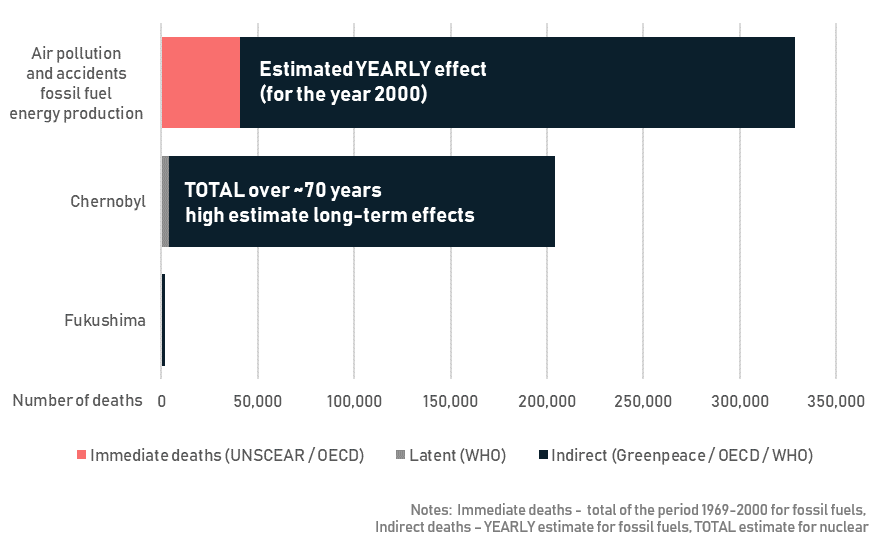 Nuclear waste and how to deal with it

Nevertheless there is a problem with nuclear which is not caused by human misconduct and has no known remedy: nuclear waste.

Nuclear waste warning messages which intend to deter human intrusion at nuclear waste repositories up to 10,000 years into the future, such as the one below (proposed by the United Nations), are a chilling reminder of the long-term toxicity of nuclear waste to human life:

This place is not a place of honor… no highly esteemed deed is commemorated here… nothing valued is here.

What is here was dangerous and repulsive to us. This message is a warning about danger.

I consider it to be the main counterargument against investing in new nuclear capacity, simply because there is no good way of managing nuclear waste. It is true to a point that most of the spent nuclear fuel is currently sitting in nuclear plants as a temporary solution.

There is recycling, as France does, with most of its spent nuclear fuel, which reduces the toxicity and the amount of  nuclear waste. But reprocessing itself still produces waste. And the long-term solution? Bury it deep in the ground.

Geological disposal means burying highly radioactive waste — which can be active for a period of 1,000–10,000 years — deep into the ground in specially selected sites and closing it down.

Finland is the first to actually get close to having a functioning geological disposal site. It is planned to open in 2023.

Thus, right now our best shot at nuclear waste management is basically putting it under rocks and forgetting about it. Promising, is it not? Nevertheless, nuclear should play an important role in our future energy plans and that is because we have more pressing issues. If you do not think so here is a good reminder.

The overall goal is to get rid of or at least mitigate climate change.  To do this we will need to limit the emission of greenhouse gases (primarily CO2) and probably the most important part of this is limiting emissions from energy and electricity production.

The International Panel on Climate Change (IPCC), an intergovernmental panel of climate scientists, which produces internationally recognised reports on the state of climate change and on mitigation pathways says:

Nuclear energy could make an increasing contribution to low-carbon energy supply, but a variety of barriers and risks exist — IPCC AR5 report (page 517).

Their climate mitigation pathways consider a ~2.5x increase in nuclear based electricity generation (see image above). Which is actually a small increase compared to renewable technologies, but considering that the capacity of nuclear has been decreasing and was on its peak back in ’93 — that is a change. 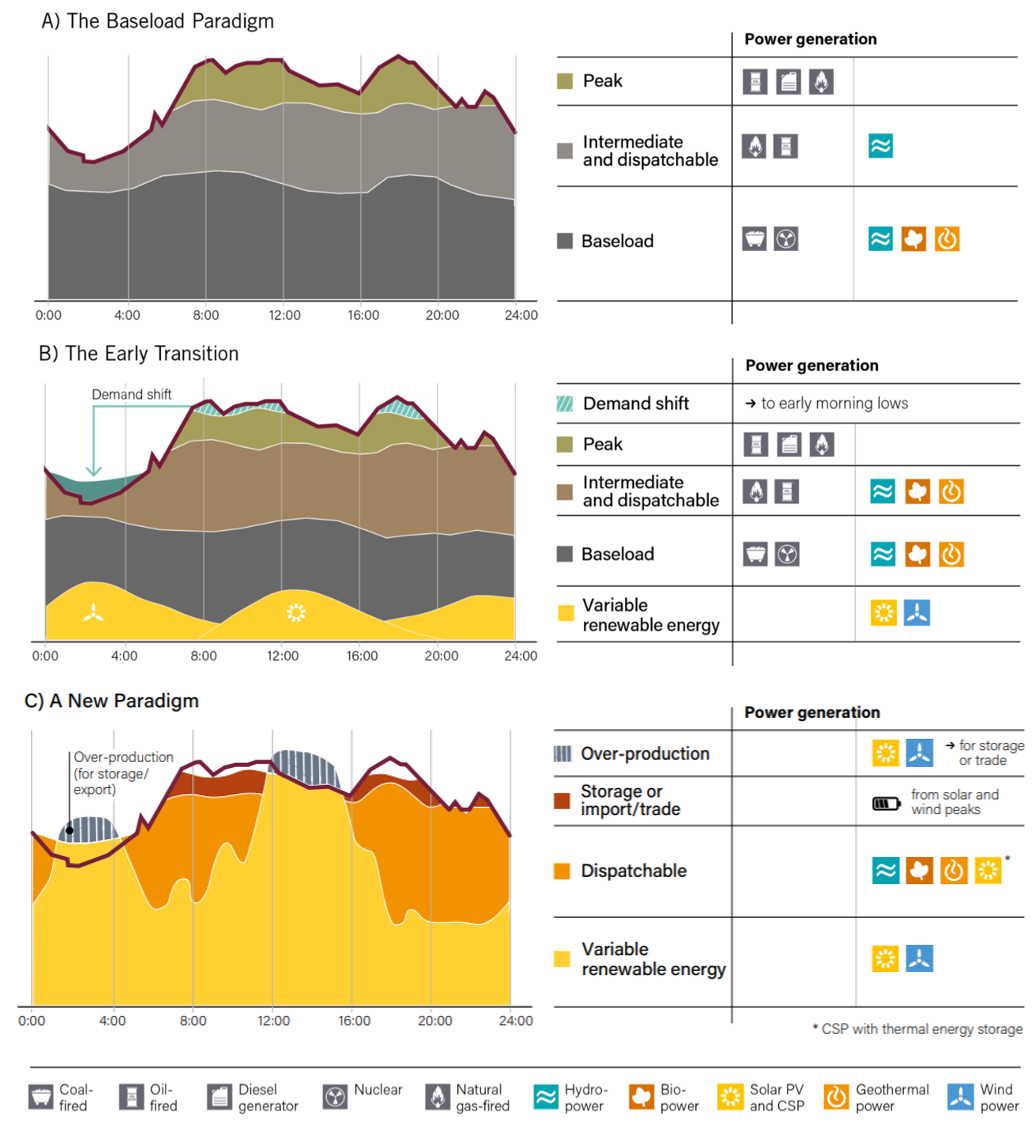 But why do we need nuclear when renewables are an option?

The answer lies in the concept of base load capacity. We have a considerable problem with storing electricity, which means that in most of the cases electricity has to be produced at the same time as it is used.

The figure above (taken from REN21’s outstanding report on renewables) shows how this works. Base load generators are large, conventional producers, running usually on full capacity and therefore producing the “base load” of consumption.

Renewables provide a prime substitute for intermediate demand with their variable energy output (B stage), but as their electricity production is variable and as — yet(2) — we do not have efficient solutions for storing the electricity they produce in order to use them as a single source of energy.  To do this vast infrastructure improvements are needed (to get to C stage).

That is why nuclear seems more feasible in the near future for many countries including France, where energy production mostly comes from nuclear.

However Europe is divided on the question. Germany is phasing out its nuclear capacity. A move made possible by interconnected grids across Europe, and thus higher electricity imports. But also by new investment in conventional sources (such as coal and gas) and thus an increased dependence on fossil fuels.

With the wishful expectation that the future will give way to smarter consumption (demand side management — think smart homes). But until then this will mean increased emissions from German electricity production.

And outside Europe those who are facing increasing consumption and do not have the comfort of an energy union are increasingly looking into using nuclear power.

The figure on the left shows new nuclear plant constructions that have started since 2010. While there are some new generation constructions in countries traditionally using nuclear such as the US, the UK or Korea, most new construction is concentrated in developing countries. China has built 14 reactors and 11 are under construction in the country.

India and Pakistan — although with smaller capacities — respectively building six and four reactors (two of them are already operable). Finally, the United Arab Emirates — with US and Korean help — has started building the first nuclear power plant in the Arab World, with Saudi Arabia following close behind.

Nuclear is a technology that has been tested and matured in Europe, the US, Japan and Russia and while its appearance in the developing world still raises new kinds of questions, for now it seems like that new countries are opting for it as a clean energy source. Owners of the technology are leading the initiative: besides the US and Korea supporting plans of the UAE, Rosatom (Russia’s state atomic energy corporation) plans to build plants in Bangladesh, Belarus, Egypt and Turkey — putting four new countries on the nuclear map.

While nuclear may be leaving parts of Europe (at a cost) globally it seems to be staying with us for the long-term as a tolerated, but not particularly popular, ally in the fight against climate change.  The lesser of two evils.

Nevertheless, it is paramount for us to really only use nuclear to a level which is inevitable. Nuclear power is a solution and a good solution in the struggle against global warming, but it should always be seen as a temporary force due to the considerable safety risks that it carries.

In the meantime we must find sustainable solutions for the waste it generates — because that is surely staying with us for the long-run.

Nuclear power will be needed to fulfil the needs of ever-growing global energy consumption without exacerbating climate change.

Entirely abandoning nuclear and filling up the space left behind with fossil fuels is rather a step back than a step forward in environmental terms.

As the French president, Emmanuel Macron said last year, referring to the German phase-out: “I don’t idolise nuclear energy at all. But I think you have to pick your battle. My priority in France, Europe and internationally is CO2 emissions and (global) warming,”.

Eventually we will have to fight the issues of nuclear too, but until then it is here and we should use it in the fight against the climate crisis.  To read more about our work in in this area, please see our Energy page.