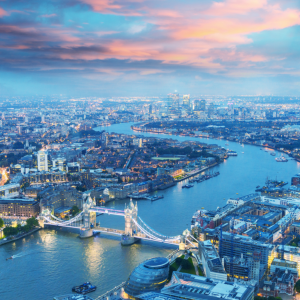 This is the second in a series of blogs looking at uses of the European Regional Database.

Our Director Ben Gardiner looks at how regional capital stocks can be estimated, how they compare and contrast across countries and within the UK, and how they relate to regional productivity.

Why the interest in investment and capital stocks?

In their recent report on UK regional productivity differences the Industrial Strategy Council noted that one of the main knowledge gaps in understanding regional productivity patterns was the lack of regional capital stock (buildings, machinery and transport, etc.) estimates. In particular, they state:

…differences in the local abundance and quality of productive assets (“capital”) and infrastructure give rise to differences in productivity across places.

No consistently produced estimates of capital stocks currently exist for UK regions. This makes it impossible to assess quantitatively the contribution of capital and infrastructure to UK regional productivity disparities.

Yet such an assessment would be very informative, especially in light of the widespread perception that some regions – most notably London and the South East – enjoy higher incomes and productivity because they receive a higher share of investments.

So, it appears that capital stocks are a missing piece of the puzzle in terms of accounting for the UK’s poor productivity performance and would be a valuable indicator.

Here at Cambridge Econometrics we can help to complete the puzzle because we have used data from the European Regional Database to explore capital stocks at NUTS2 level (which corresponds to counties (in England), and groups of local authorities and boroughs elsewhere).

The OECD, in a new report on productivity in the UK’s Core Cities, lists the drop-off in capital investment as one of the key reasons for the UK’s productivity slowdown (see Figure below), stating that:

An important explanation is related to a decrease in investment. According to Bartnett et al. (Bank of England Quarterly Bulletin 2014 Q2), the reduced investment in physical and intangible capital can explain one-third of the productivity gap in the UK.

The figure below (replicated from the OECD report) clearly shows both a levels and a growth effect with respect to UK productivity.

The level of UK productivity has been below some of its main counterparts for some time now, while it is also evident that after the Great Recession there was an additional slowdown in productivity which is mostly unique to the UK. 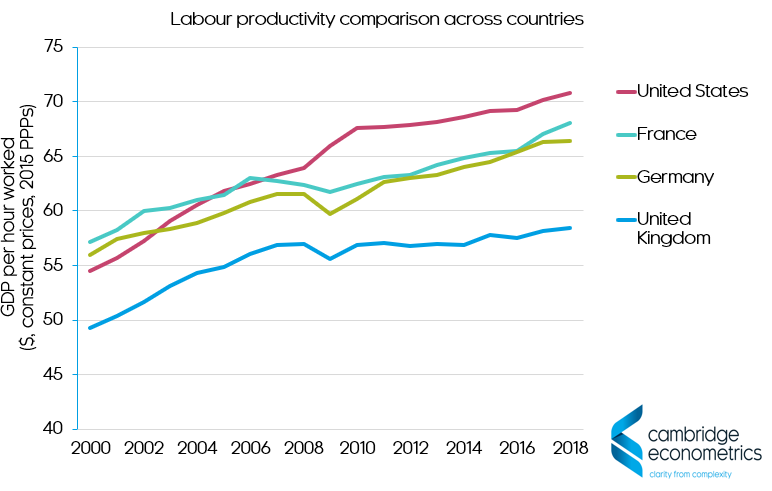 A key driver of labour productivity is the amount of capital invested in workers, and using the European data to calculate capital stock per worker on the same basis as the previous OECD data gives an interesting result: we can see both the level and growth effect present in the UK data as compared to Germany and France.

What about the regions?

Having established there is a clear association between capital stock usage and productivity, what does the picture look like at regional level? This time we focus on the UK.

The data allow us to explore down to NUTS2 level, which corresponds to counties (in England), and groups of local authorities and boroughs elsewhere. There are 40 in total, as represented by the maps below which show, alongside one-another, capital stock per hour worked and labour productivity for the most recent period available.

The figure below shows the degree of association between capital stock and GDP per hour worked, with a few outlying locations identified. 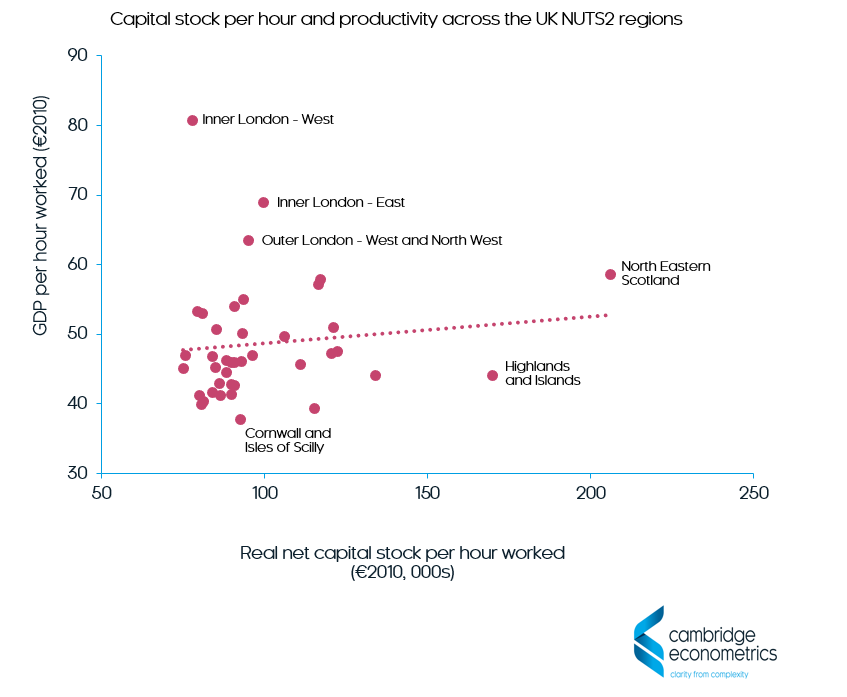 For example in the case of London regions, which typically come top of the productivity measure but do not score so highly on capital stock, other factors such as skilled labour (human capital), agglomeration forces (density and diversification of activity) and connectivity are probably more important explanators of performance.

Also, if we remove the North Sea Oil effect for North Eastern Scotland (around Aberdeen) the already weak relationship would disappear altogether.

Another interesting feature is if we look at the how the correlation between capital stock usage and productivity (i.e. the slope of the dotted red trendline in the above figure) has changed over time. This can be seen below.

The trend is clear, indicating that capital stock is becoming less important over time in its links with relative productivity performance across the regions. There are several (often inter-related) reasons why this might be true: 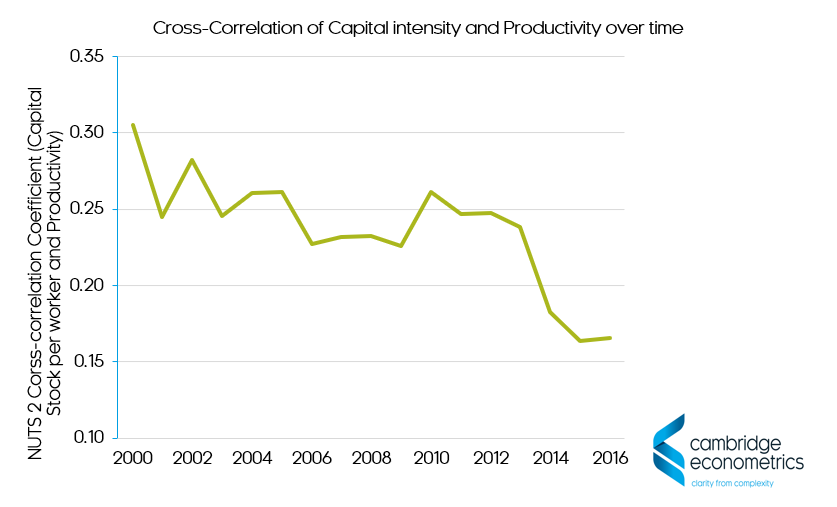 Source: Cambridge Econometrics own calculations, based on ARDECO data

Why is this important?

Capital stock is rightly seen as an important driver of labour productivity, as usually people with access to better capital (whether that is machinery, buildings, transport, etc) become more efficient (productive) at what they do.

Not having access to regional capital stocks is an important missing piece in the productivity puzzle, but it is only one piece.

As we have shown, capital stocks do provide some explanation but it is far from all complete picture, and arguably becoming less important over time.

Also, the smaller the spatial scale being analysed, the more individual characteristics of a place become important and different drivers and features of performance become identified, and these may or may not involve capital infrastructure.

An improved understanding of the role played by capital and other economic, social, and environmental features is continually being worked on, by international organisations such as the OECD and European Commission, national bodies such as the UK2070 Commission and the Productivity Insights Network (of which Cambridge Econometrics is a participant).

It is hoped that by having another piece of evidence, we will get a step further to unlocking the UK’s own productivity puzzle.