Home » Blog » No-deal Brexit: how bad could it be?

No-deal Brexit: how bad could it be? 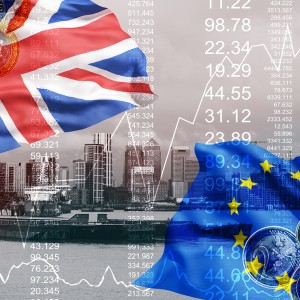 It was all supposed to be so easy but, with weeks to go, a no-deal Brexit is still a possibility amidst the political chaos. How bad could it be? Managing Director, Phil Summerton, explores the indicators.

“There is no plan for no deal, because we’re going to get a great deal” – Boris Johnson, Prime Minister (then Foreign Secretary), 11 July 2017.

“We didn’t vote to leave without a deal” – Michael Gove, Cabinet Secretary, March 2019.

And yet, the UK is now just a matter of weeks from crashing out of the European Union with an agreement for our ongoing relationship hanging in the balance.

What would crashing out without a deal mean for the economy? In the short term, it’s hard to say. Recession? Maybe. The chaos implied by the government’s own planning documents, Operation Yellowhammer, point that way.

What will happen after Brexit?

The UK government has announced that it will reduce most tariffs to zero after Brexit in an attempt to avoid a price shock for consumers and business. So, if zero tariffs are applied to imports will prices for consumer goods fall? 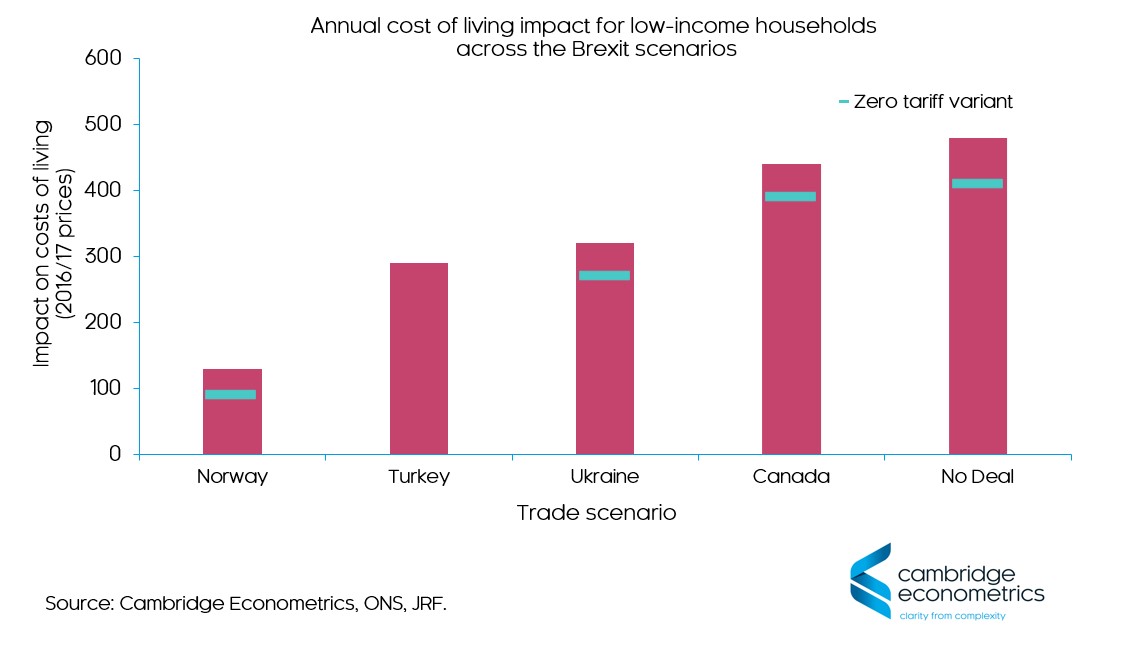 The zero-tariff variant of the ‘no-deal’ scenario assumes that we will have a comprehensive free trade deal in place with our largest trading partners outside of the EU (China and US) as well as zero import tariffs. However, these will not outweigh the administrative costs and the costs of non-tariff barriers of no longer being within the Single Market.

Moreover, British consumers are already feeling the squeeze from the significant depreciation of pound sterling, which has been down 15p on the Euro since the referendum result in 2016, pushing up the price of imported goods and services.

The impact of a no-deal Brexit on the poorest one fifth of UK households, shows an average overall increase in the cost of living of £400 per annum (zero-tariff variant).

Food prices would increase the most across the categories studied.  As low-income households spend a disproportionate amount of their income on food then this would bite the hardest: 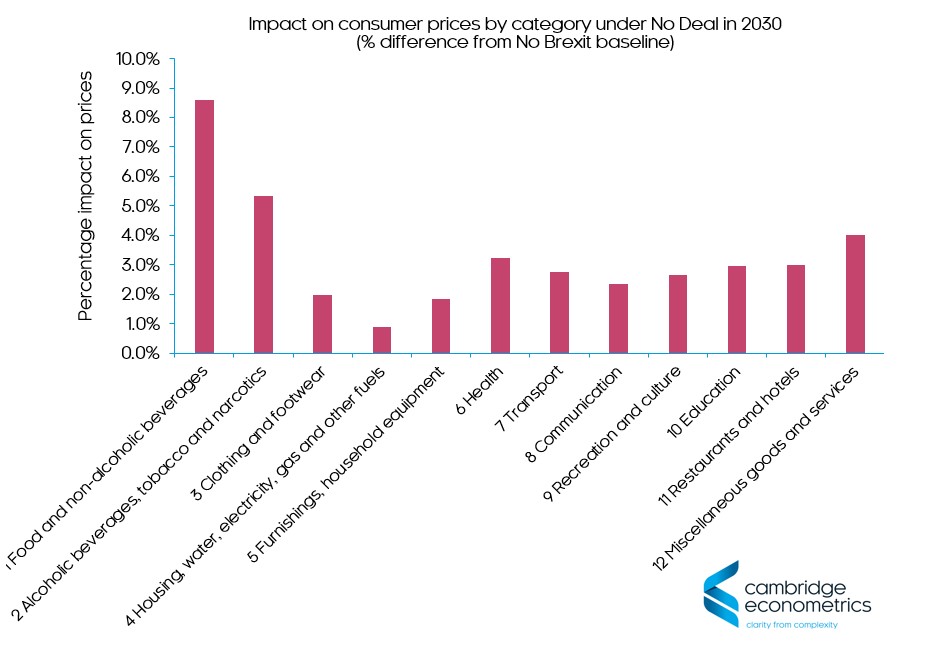 Often, negative signals from the housing market are the first signs that an economy is dipping. The most recent numbers certainly suggest that things are looking bleak. 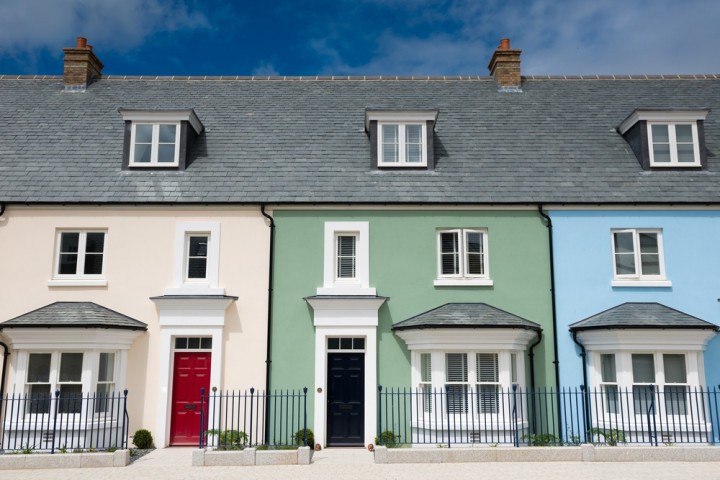 This month the Halifax reported the slowest annual house price growth in the UK for six years and according to KPMG’s Brexit house price report ‘Outlook for UK house prices’, published last month, a no-deal Brexit could lead to a drop in house prices of between 5.4% and 7.5% across different regions next year.

Bearing in mind that these figures precede 31st October and are indicators of relative economic health, it doesn’t look good.

Would a no-deal Brexit lead to recession?

A recession is defined as two consecutive quarters of declining GDP. We’ve had one quarter of decline so far, April to June, of 0.2%. However, the economic story for July was a little better than some expected and so perhaps Q3 will be mildly positive before the UK leaves the European Union on 31 October.

In September, the British Chambers of Commerce cut its economic growth forecast for this year to 1.2% from its June forecast of 1.3% and lowered the figure for 2020 to 0.8% from 1.0%.

The outlook for the medium term (the next five to ten years) is far too contingent on the agreement we eventually forge with the EU and other trading partners, but economists mostly agree that without access to the EU’s single market growth will be much lower than it might have been, long after the chaos has been navigated.

“The consequences of a no-deal Brexit won’t affect me”

Many feel disconnected from the economy they see described in the news because economic prosperity borne out of globalisation and financialisation has been relatively concentrated.

Our analysis shows, however, that the consequences of a no-deal Brexit in both the short and the medium term will be felt more by those who can afford it least and are already struggling to make ends meet. Often the same people who already feel so disconnected.

The worst economic implications come through two channels: low growth or even contraction, leading to fewer employment opportunities and/or redundancies; and higher prices from a falling pound putting pressure on household budgets. Those with low incomes and vulnerable jobs will suffer the most.

“The experts are always wrong”

The old joke runs “economists use decimal points to show they have a sense of humour”. Economists would be better understood, if we were treated more like doctors than mathematicians. You would not expect a doctor, with any degree of certainty, to forecast the day you will suffer a heart-attack. But if you were diagnosed at risk of having a heart attack, you might heed a doctor’s advice to have regular check-ups, eat a healthier diet and take regular gentle exercise to lower your risk.

Economists can diagnose factors that put an economy’s “health” at risk, but we cannot accurately predict the date of a recession or a market crash (unless it is imminent). Too much is unknowable. Judged against this expectation, economists will always fail and it’s only reasonable for the public to lose faith in the countless studies warning of economic boom or gloom.

Viewed more like doctors, we should all be concerned that there’s a broad consensus across the economics profession that a no-deal Brexit increases the risk of a prolonged downturn.

At the very least, the medium-term outlook for economic growth under no-deal is that it will be significantly lower than if the UK retained access to the EU’s Single Market.

A few ‘quacks’ in the profession believe that the long-term effect of a no-deal Brexit will be a vastly more prosperous UK outweighing the short-term costs, but the assumptions underpinning such quackery do not stand up to scrutiny and should be ignored.

The impact of Brexit on poverty in the UK was published in September 2018 for the Joseph Rowntree Foundation.

Preparing for Brexit was published in January 2018 for Mayor of London Sadiq Khan.