This latest blog by Hector Pollitt suggests that the ‘more is better’ assumption is too simplistic. In fact, he argues, the benefits of international trade are overplayed and it’s time for economists to take a more sophisticated approach.

Trump and Brexit – never far from the headlines

International trade has received a lot of media attention recently. Since President Trump was inaugurated, the US has pulled out of the Trans-Pacific Partnership (TPP), put import tariffs on several products and may be risking a trade war with China.

Here in the UK, where everything is viewed through a Brexit lens, we see endless analysis of potential trade deals, both with the EU and with potential third parties.

It’s clear therefore that, rather than moving towards a free trade future, we are moving away… towards one in which international trade is becoming more constrained.  As it is generally believed that globalisation has been one of the main drivers of growth in recent decades, this is unlikely to be a good thing.

After all, all economists know that more trade is always good, right?  But what if we question the conventional wisdom and find that the benefits of trade are overplayed? 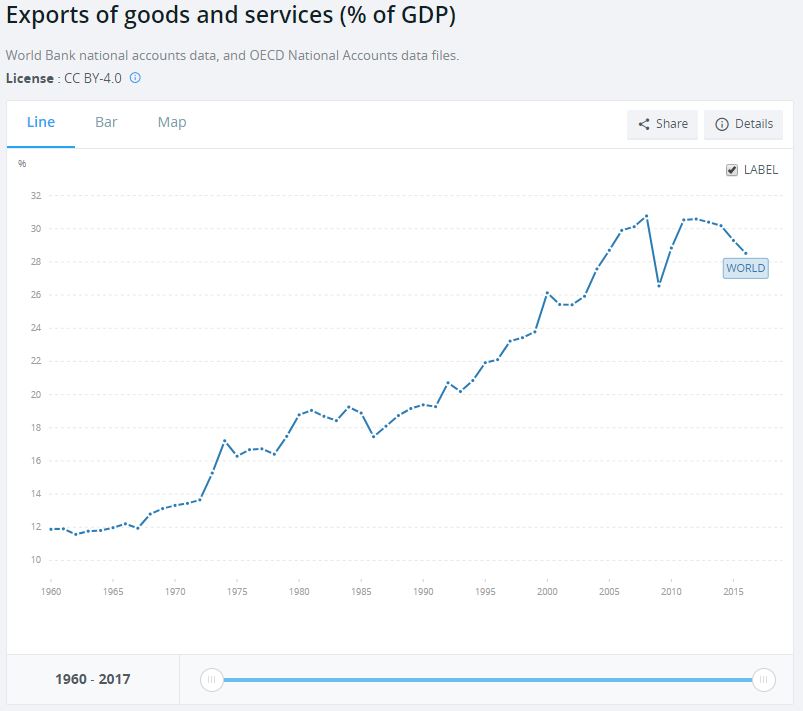 Mainstream economics subscribes to the theory of comparative advantage, originally penned by David Ricardo in the 19th century. Ricardo elegantly showed how, through trade, each country could specialise its production in line with its local conditions.

The limitations of the models used

Computable General Equilibrium (CGE) models have been used for decades to assess trade policy. Indeed The T in GTAP, which provides the data for most models, stands for trade (Global Trade Analysis Project).

The problem is that the level of abstraction necessary takes us a long way from the observed reality.

First, the notion of comparative advantage is highly questionable. Paul Davidson notes that it may have made sense in the 19th century when production depended on the land, but nowadays technologies and business models cross boundaries easily. Steve Keen goes a step further and says that comparative advantage was never more than a textbook theory.

Either way, in a world in which highly automated factories produce a large share of traded goods, there is reason to believe that it is absolute rather than comparative advantage that matters.

The second issue relates to optimisation assumptions in the models. Comparative advantage might make sense if all resources are used optimally and output is determined by how efficiently factors of production can be used. But the level of output in an economy is determined by the level of aggregate demand. Yes, there are supply-side limits on capacity but we rarely breach them and investing in new domestic capital may be as good a way of raising production limits.

Once again this is a case where the treatment in Cambridge Econometrics’ E3ME model differs substantially from CGE models. In a demand-driven model, more exports adds to aggregate demand and more imports subtracts from aggregate demand. More exports therefore leads to more jobs.

A scenario with a shift in trade patterns is on its own zero sum and the net impact on global GDP will depend on a range of factors to do with methods of production and amount of spare capacity in the two countries.

In general, shifting to a low-cost production centre will reduce aggregate demand at global level unless all the cost reductions are passed on to final prices.

In summary, changes in trade volumes will have some impact on GDP, but other factors like the amount of investment and public and private consumption are more important.

Other positive aspects of trade

There are, however, areas where trade will have a positive impact. If a sector operates under a limited degree of competition, then opening it to trade could result in price reductions that would benefit final consumers. It may also spur innovation and boost product quality.

Both of these factors are highly difficult to quantify with the available data we have but seem to be a crucial part of the story. At Cambridge Econometrics, we are currently interrogating the data to see what we can find here. It is notable, however, that the benefits (or costs) of more competition do not feature in a standard CGE model for the simple reason that the model assumes perfect competition already.

So what does all this mean?

The reality is that the benefits of trade are much more nuanced than is currently thought. In some cases the benefits may come through completely different channels to what we think they do. The possibility of net costs can also not be ruled out.

The debate amongst economists and their models really needs to be broadened to account for a wider selection of theories and methodologies. Trade plays a huge role in the modern economy and it needs to be better understood.