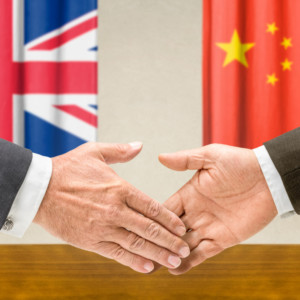 Head of Society Chris Thoung shares his thoughts on why, when considering post-Brexit global trade deals, it’s important to remember that behind the numbers and the pound signs are people and jobs. Chris illustrates this with our recent work with the China-Britain Business Council which looked at UK jobs supported by the UK-China relationship.

No longer a member of the EU, the UK is now having to find its new place in the global economy.

Following months and years of negotiations, the UK is out of the EU and the ‘Global Britain’ project continues. Global Britain raises many questions about our relationship with the rest of the world, with trade deals being an area of particular attention and contention. However, we mustn’t forget that, behind the numbers and the pound signs are people and jobs. These jobs also hinge on more than simply what we ship, fly or send abroad. The modern global economy is highly interconnected, in ways that aren’t always immediately apparent.

As an example of this, we did some work last year for the China-Britain Business Council, to consider the jobs implications of the UK-China relationship here in the UK. In particular, we looked at:

Key findings from the report

As the table below shows, we found that the above were worth £34bn to the UK economy in 2019 (i.e. pre-COVID-19), supporting over 100,000 full-time equivalent jobs (in the table, 114,000-129,000). Three findings particularly stood out to us which illustrate how interconnected the modern global economy is, and that it is worth remembering it’s not just about trade when it comes to job creation.

There’s value in trade, but Chinese students are also producing UK jobs too

Trade accounts for most of the value in the table (£30bn in 2019; almost 90%) and most of it is goods (£25bn), such as motor vehicles and crude oil. Exports of services like architecture and engineering are smaller (£5bn); as is the value of Chinese tourism and students’ expenditure (around £2bn apiece). However, on a jobs basis, the emphasis shifts somewhat. As defined, trade remains important but sectors like retail and hospitality, catering to Chinese tourists and students, represent at least a quarter (34,000) of the jobs.

We also looked at where the jobs are. The map below shows that the highest numbers of jobs we could link to the UK-China relationship are in London, followed by Scotland, the West Midlands and the South East.

Jobs at a regional level aren’t always about trade either

While the largest UK jobs numbers are associated with trade, this is not the case in every region. The chart below shows that London has the most jobs associated with UK-China links, but many more are related to London’s position as a tourist destination, with a few other cities also benefitting.

A sizeable number of jobs are also related to the spending of Chinese students in London. This is also the case in Yorkshire and The Humber, principally at the universities of Sheffield and Leeds, and to some extent York.

What next for global Britain and the UK-China relationship?

Our findings show that jobs supported by the relationship between two economies are diverse. Future relationships aren’t just about the jobs from sending goods and services overseas, but also from catering to visitors (here, tourists and students).

What happens next for the UK-China relationship and how this affects jobs is unclear. Our interviews with businesses and universities last year (and during the pandemic) highlighted that prospect of changing regulations presents both challenges and opportunities. This will no doubt be the case for every country Global Britain looks to, with quite different jobs implications.

Much is overshadowed by the current pandemic but even before then protectionist tendencies had been rising. It will be interesting to see how UK jobs are implicated as the global economy recovers from the pandemic and the UK continues its planned pivot from the EU to elsewhere in the world.

For more analysis see our reports from last year: