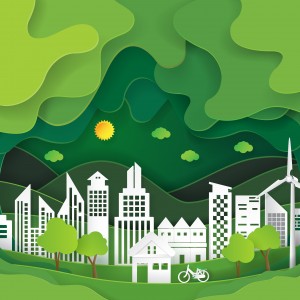 The concept of environmental tax reform is not new and is core to environmental economics, but is it compatible with Modern Monetary Theory?

Environmental taxes aim to raise revenues for government, while at the same time discouraging behaviour that damages the environment. Examples include the UK landfill tax and the climate change levy.

Environmental Tax Reform (ETR) is when another tax (e.g. on income or labour) is reduced by a similar amount (as happened when the climate change levy was introduced).

The result is a shift in economic resources rather than an increase or decrease in the overall tax take.

Economists debate whether it is possible to obtain a ‘double dividend’ from ETR of obtaining both better economic and environmental outcomes, but there is a consensus that higher environmental taxes and lower income/labour taxes will broadly offset each other in terms of economic impacts.

MMT (as discussed in the context of our modelling in ‘E3ME, endogenous money and Modern Monetary Theory (MMT)’) suggests that a government must first spend to later gather tax revenues.

In a country like the UK that issues its own currency, the central bank can always provide liquidity to the government in the form of newly created reserves and the government should never (non-voluntarily) default on its debts.

MMT is increasingly being recognised as the way that government finances work in the real world, as opposed to a world from textbook economics.

A simplistic conclusion would be that MMT undermines the whole concept of ETR and the two ideas are incompatible. Raising environmental taxes in ETR is partly to allow other harmful taxes to be reduced. But MMT says that governments could just reduce these other taxes anyway as it is not necessary to balance budgets.

Such thinking misses the constraints placed on production by the real economy, however. A government cannot keep on stimulating the economy through tax reduction indefinitely because at some point it will run out of capacity to produce things.

Limitations of the real economy

One way in which the economy can run out of capacity to produce things is due to limitations of the workforce (for example, people can only work a set number of hours). Factories and machinery also have their limits and any attempts to push these limits will lead to price inflation.

At this point we get back to a classical economic problem of how to best allocate the available resources, based on a set of decisions that the environmental tax can influence.

Merging MMT with ETR leads to slightly different thinking. The environmental tax becomes both a tool to push economic activity to less damaging means of production, but also a tool with which to limit the monetary claims on resources in the real economy.

Other taxes on things we don’t want to discourage (e.g. labour and employment) can be pushed as low as possible, again without stoking inflation. But to be clear, the larger the environmental tax, the more scope there is for reducing these other taxes.

ETR still looks like a good policy area to pursue but, unless the national economy is in a boom period (i.e. close to full employment), labour or income taxes could be reduced by more than the value of the sums raised by the environmental tax, at least initially.

Yes, the government deficit would increase but the outcome would likely be both higher GDP/employment and a better environmental outcome. In summary, a clear double dividend result.

If you are interested in the implications of environmental tax reform or any of the other points raised in this blog, please contact me.