Home » Blog » Counting the economic cost of the global pandemic

Counting the economic cost of the global pandemic 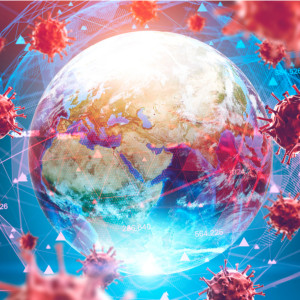 Senior Adviser Andrew Sentance explores the drivers behind the projected long-term cost of the global pandemic. Andrew argues that countering the long-term impact of Covid-19 needs to be high up on the economic policy agenda both nationally and internationally.

The Covid pandemic, which has swept through the world since early last year, has had a massive impact in terms of human health, social disruption and lost economic output.

The World Health Organisation recently estimated that ”excess deaths” due to the pandemic  were around 3 million in 2020, considerably in excess of the 1.8 million directly attributed to the disease. That represents a 5 percent addition to total deaths worldwide. So far this year, a further 1.7 million deaths directly linked to Covid have already been recorded in less than five months. So the death toll in 2021 as a whole is set to exceed 2020 by a considerable margin.

In addition to the impact on health, there has been massive social disruption due to the need to impose lockdowns and restrict foreign travel. According to the International Air Transport Association (IATA), global air travel fell by 60 percent last year and in 2021 is only expected to recover to just over half its 2019 level.

The broader economic cost has also been very high

2020 saw the larges fall in annual global GDP recorded since the Second World War. The IMF estimates that real GDP across the world economy was 6.6 percent below its pre-pandemic forecast – as the chart below shows. This is equivalent to a loss of output of around $6 trillion (at current values) in 2020 alone. Though global GDP is expected to bounce back this year and next, the latest IMF forecast published last month indicates that in 2023 and 2024, world GDP in real terms will still be around 3.5-4 percent below the level expected before the pandemic. There is little sign that this gap will be closed in future years. So this represents an ongoing loss of annual global GDP of around $3.5 trillion (at 2021 values), equivalent to an average of $450 per head of population across the world economy.

This significant output loss is forecast to occur despite the fact that the employment consequences of the pandemic have been less severe than feared and even though governments around the world have provided unprecedented amounts of fiscal stimulus. 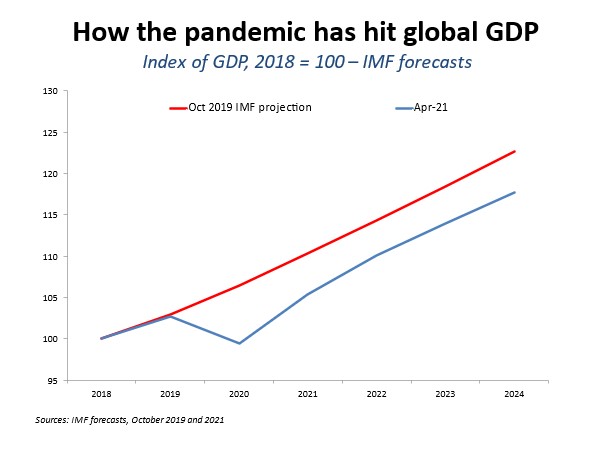 The main driver of this loss of output is a drop in productivity – particularly in the services industries most affected by the pandemic.

Some businesses which have been forced to close may not reopen. And many businesses will find they need to operate in a different way as lockdowns are eased and they open up again.

This projected longer term loss of output should act as a counter to the current wave of optimism driven by the vaccination roll-out and signs of a short-term bounce back in output in a number of economies, including China, US and the UK.

This longer-term loss of world output is likely to be concentrated on some of the poorer economies in the world. The Chart below compares the current prospect for 2023 GDP, as projected by the IMF, with the last full forecast made before the pandemic (October 2019).

The economies shown in the chart are for the G7 and 3 large emerging economies – China, India and Brazil.[i] The bars on the chart reflect the percentage difference in the level of real GDP now forecast for 2023 – i.e. after the expected bounce back in output this year and next – compared with the October 2019 projection. 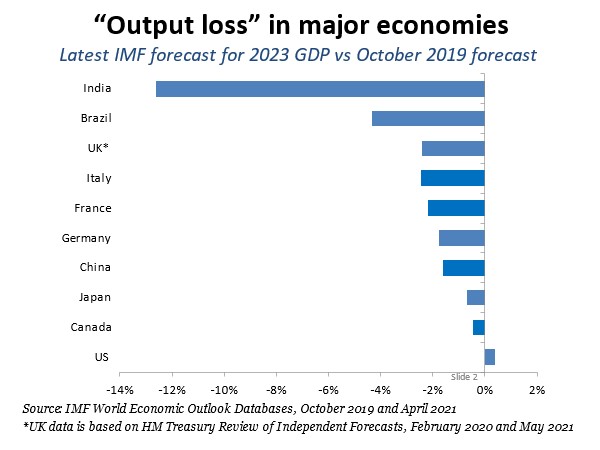 For the G7 economies and China, the “output loss” due to the pandemic is in the range 0-2.5 percent, lower than the global average of 3.5-4 percent.[ii] India and Brazil are expected to suffer much bigger output losses, with the reduction in projected 2023 GDP in India running into double digits. There will be many other poorer economies – in Asia, Africa and Latin America – in a similar position to Brazil and India.

It is not hard to see why poorer economies like Brazil and India are likely to take a larger longer-term hit to GDP than richer economies.  Poorer economies have less adequate health systems and less resilient social and economic structures. They are also in a less strong position to provide fiscal support to employment and badly affected businesses, and hence limit the economic damage from the pandemic.

With vaccines being rolled out in many countries, and some economies bouncing back as lockdowns are eased, there is a growing air of optimism about the prospects for the global economy this year and next. But the pandemic will leave a legacy of lower global output for many years to come. And poorer countries look set to be harder hit than richer ones.

Developing policies to counter these longer term economic impacts needs to be high up the economic policy agenda both nationally and internationally. The G7 summit in Cornwall next month is an ideal opportunity to take new initiatives to stimulate global growth – by reducing barriers to trade, supporting green investment and providing development assistance to the poorest countries in the world, which have been hardest hit by the pandemic.

[i] For the UK, HM Treasury consensus forecasts (May 2021) are used in place of the IMF projection, as they are more up to date.

[ii] The United States is actually now forecast to have a slightly higher level of GDP than before the pandemic, which reflects more positive economic policies which have been implemented since President Biden came to power.