Home » Blog » Coronavirus recession: out of a clear blue sky 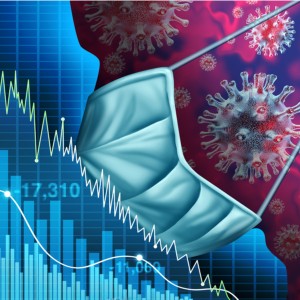 In January this year, the IMF was confidently predicting that world GDP would increase by 3.3 percent this year. Their updated April forecast released earlier this week points to a decline in GDP of roughly the same magnitude – 3 percent.  This is a drop of about 6 percent in global GDP in 2020 relative to the January forecast.

The latest results from the Cambridge Econometrics E3ME model suggests a similar hit of around 5-6 percent to global GDP relative to the previous baseline forecast.

Here in the UK, the Office for Budget Responsibility (OBR) has produced an even more sobering assessment. The OBR’s “reference scenario” implies that UK GDP could drop by 12.8 percent in 2020, compared to the March Budget forecast of growth of just over 1 percent. As the chart below shows, if this projection is correct, it would be the largest fall in UK GDP for over 300 years!

In my career as a professional economist, I cannot remember such a sharp reversal of the economic prospects for the world and the UK happening in such a short space of time.

That is partly because we are experiencing a new and unprecedented driver of recession – a global health emergency, which is causing governments around the world to shut down their economies. Previous global recessions have been driven by the private sector response to economic shocks. This is the first recession driven directly by government policies, aimed at deliberately restricting business activity.

The recovery could be slow and painful for some

The general expectation of many forecasters is that we will experience a strong growth bounceback next year. World output is projected to rise by 5.8 percent in 2021, according to the IMF. The OBR is also projecting a strong recovery for the UK economy next year – though with the obvious health warnings about current uncertainties.

However, this is an optimistic view – that after the impact of the COVID-19 coronavirus pandemic we can return to somewhere close to the long-term trend for global growth. There are a number of reasons why things might turn out less well.

First, we cannot predict exactly how long the pandemic economic impact will last. The general expectation is that the shutdown will persist for about three months, followed by a gradual easing of lockdown restrictions. But we cannot be sure about this, as this is an unprecedented global pandemic. A six to nine month lockdown period would have more severe consequences, as would a recurrence of the virus if restrictions are eased prematurely.

Second, we are not sure how easy it will be for businesses to start up again after a severe lockdown. Many of the worst affected businesses are small firms, which may not survive the lockdown period. Governments are trying to protect businesses, but they cannot do so perfectly. In economic language, there is likely to be a hit to the supply-side of the economy which could persist for a number of years. In addition, households and firms are likely to exit the lockdown carrying a higher burden of debt – which is likely to constrain consumer spending and investment in the years ahead.

Third, public finances will be under severe stain due to the need to support workers and businesses in the lockdown periods. Governments with strong economies and a good record of servicing public debt – like the UK, US and Germany – can weather this storm. However, even in the UK, the OBR analysis suggests that public borrowing in 2020/21 could be as high as £273bn (compared to a Budget forecast of £55bn) and the public debt to GDP ratio could rise to nearly 95 percent.

Many other governments, however – with less strong credit records – will find borrowing and servicing public debt more difficult. Another debt crisis could be looming for these more vulnerable countries, and it may constrain their ability to use fiscal policy levers to boost recovery prospects.

A sharp dip in global output, followed by a rapid bounceback, is therefore the most optimistic case for the global economy. The alternative scenario is a slow grind back from the trough in economic activity which is expected in the second quarter of this year.

What this suggests is that government fiscal support for economies worldwide will be needed to get businesses and households back on their feet – not just for a few months, but for several years. The countries best able to provide this support will bounce back more quickly from the COVID-19 coronavirus crisis. But those with more fragile public finances will struggle to recover – repeating the difficulties a number of countries experienced following the Global Financial Crisis.