The excitement of the general election is now well and truly behind us.

The government is apparently striving to re-energise the domestic policy agenda now that ‘Brexit is done’….

Anthony Barker, Director, takes a look at how plans for public spending sit alongside the ‘big picture’ trends.

The new administration was elected on a manifesto that had few truly new pledges for further spending.

What has been costed would only bring annual spending back to where it would have been with just modest (by historical standards) growth instead of the ‘austerity years’.

The manifesto offers little likelihood of meaningful funding increases outside the priority areas of education and health.

However, past experience suggests spending will turn out higher than currently planned. Alongside unforeseen events there are the uncosted manifesto pledges, and long-term pressures of demographic change which have already been felt.

The challenge of ‘levelling up the economy’ will also bring into focus the challenges facing local government, given the current financing arrangements.

Spending and taxation – the broad-brush picture

First, the ‘big picture’. Public spending totalled £810 billion in 2018/19 – around 38% of GDP. Of this, around 10% was capital spending (investment) and about half of this was ‘net additional’ and was over and above making good depreciation.

Less than half of current expenditure is day-to-day running of services (e.g. schools and hospitals or staff costs) with the majority going to areas that are more demand-led and not easily controlled by departments, including welfare spending.

To fund the spending, Government collected just under £790 billion in receipts from the various tax and non-tax sources. The largest contributions being from income tax (26%), VAT (just under 20%) and National Insurance Contributions (17%).

Only 8% of receipts currently come from corporation tax – about the same as comes from council tax and business rates combined.

Public spending is set to rise

The decline and flat-lining of total public spending in real terms implemented since 2009/10 is unprecedented in recent times.

The previous administration had already planned to increase both current and capital spending and what costed polices were in the Conservative manifesto indicated a further (modest) increase (mainly in investment spending) – indicated by the red dot on the chart above.

This would take spending to where it would have been if it had risen only modestly since 2009/10. 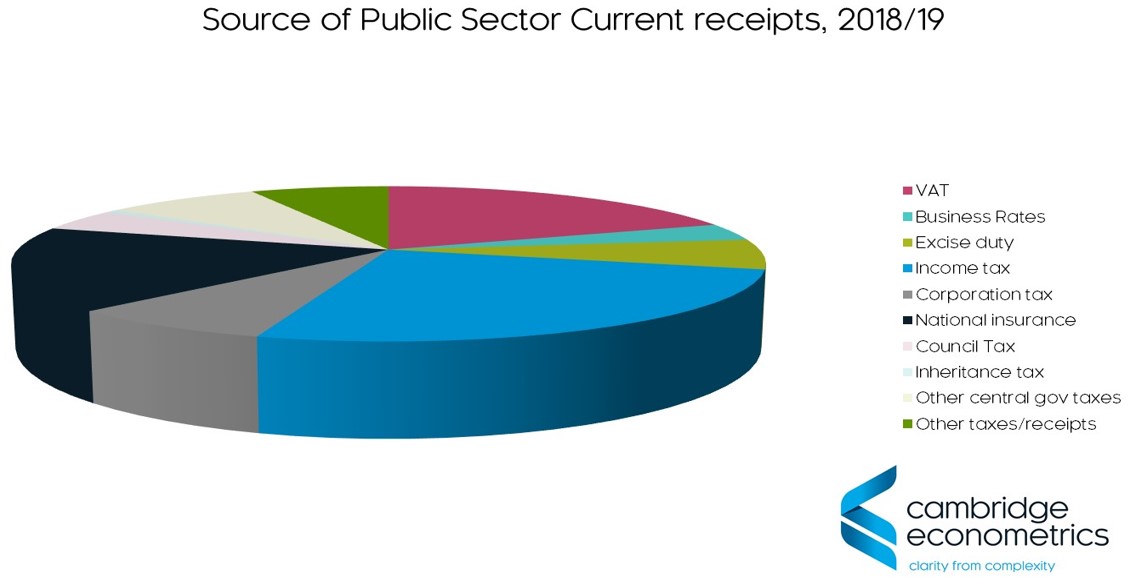 There was much in the manifesto that was uncosted.  However, manifestos rarely, if ever, accurately predict outcomes.

The forthcoming Budget in March will provide more detail on the direction the new government will take.

As IFS Director Paul Johnston remarked “it is highly likely that the Conservatives would end up spending more than their manifesto implies and thus taxing or borrowing more.”

The Manifesto confirmed previous commitments to increase spending on education and health. In the case of education this will reverse (some) of the past losses. There is little scope for day-to-day spending in other areas to reverse the cuts that have already been made.

Spending on social protection accounts for a third of all government spending and has risen through the period of austerity despite a strong jobs market, the high-profile impacts of the welfare cap and the moves to Universal Credit.

The rise was due primarily to funding the state pension, with the number of people aged 65+ increased by more than 20% over the last decade (the ‘triple-lock’ guarantee on the value of the state pension clearly played a role as well).

The ageing population will continue to increase demands for spending on health and social welfare. Even in the relatively short timescale of the next parliament (2019-24), those of pension age will increase by more than 500,000 (4½%).

Looking further out and the demographic pressure is even greater. By 2040 the population of pension age will have increased by 30% (or 3.7 million) and those of the very elderly (with the most complex health needs) by 60%, or almost 2 million.

While the expectation is that public spending will end up higher than currently foreseen, the government has restricted its scope for raising additional revenues.

Almost two-thirds of government revenue is from income tax, VAT and National Insurance – and the government has ruled out changes in tax rates.

However, if higher tax revenues are needed then it seems implausible that these sources will not make some contribution. If it isn’t achieved from a stronger than expected economy growing the tax base then one option would be to adjust the thresholds.

Local government is ‘responsible’ for around 22% of total public spending. This share has not changed much over the last five years or so but the source of funding has; with a much greater reliance now on locally-levied taxes (and reserves) to fund the wide range of local public services, including social care. The Conservative manifesto did not suggest this trend would be reversed.

Local government spending increased modestly over the last few years (by just under 1% pa in nominal terms since 2014/15).

Financing from central government departmental budgets (not including transfers such as welfare payments) fell by 18% over this time while local financing increased by more than 50% to make up some of the shortfall.

This switch of revenue sources (and the immediacy for people of locally-levied taxes) illustrates why local government may appear to face more focused displeasure that central government when it comes to setting tax rates.

Going forward, the modest increase in central government grant funding announced by the previous administration was confirmed for the time being. The only additional manifesto commitment was additional money ring-fenced to mend potholes, meaning that the sector will continue to rely on increases in locally-collected taxes to meet spending pressures.

A fundamental review of local government financing – which still has council tax bills based on property valuations from 1991 – is not mentioned. Nor is a vision for the long-running challenge of how to finance the accelerating costs and demands of the adult social care system, other than the initiation of cross-party talks.