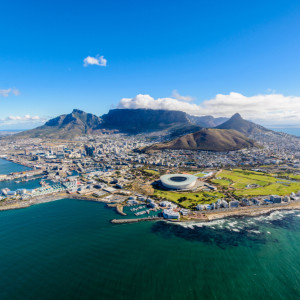 Richard Lewney, Chair of Cambridge Econometrics, shares five key outcomes from a joint modelling project with UN PAGE estimating the likely impacts of South Africa’s Covid-19 Economic Reconstruction and Recovery Plan. Richard suggests that there is an opportunity for South Africa to invest in its green potential, and become an inclusive green economy.

As we try to look ahead to a future in which Covid-19 has been brought under control, many of us are asking whether we can steer society towards a future that is better than the trends that prevailed before the pandemic. We don’t want to ‘return to normal’ if ‘normal’ means growing economic and political polarisation, catastrophic global warming and environmental degradation.

Some are advocating a Green New Deal in which government takes a lead role to ‘build back better’. But are such policies realistic in practice for a country already facing significant economic, social and environmental challenges?

We recently undertook modelling with the UN Partnership for Action on Green Economy (UN-PAGE) to estimate the likely impacts of South Africa’s  Covid-19 Economic Reconstruction and Recovery Plan (ERRP) distinguishing policies that focused on economic stimulus from those that included ‘green’ elements. We also examined what might happen if the ‘green’ elements were pushed harder.

Here are five key outcomes from the project

Conventional economic stimulus policies lead to a return to normal

By far the largest element of the ERRP consists of conventional economic stimulus policies. The South African government  feels constrained by financial markets not to increase its budget deficit substantially, so the Plan relies heavily on policies to stimulate private sector investment.

If that succeeds, GDP and jobs will be boosted in the long term but CO2 emissions will bounce back. This element of the Plan looks more like ‘return to normal’.

Those impacts will take a few years to come through, so there’s a place for targeted spending to get workers into temporary jobs now, to mitigate the long-term damage done by time spent out of work. The ERRP includes a public works element to act as a bridge into permanent work, if those jobs become available.

Coal production: ‘green’ gains in other sectors outweigh the losses in coal mining

South Africa is a major coal producer and exporter.  That part of its economy and those jobs cannot continue in a green future unless technological innovation in carbon capture and storage provides a silver bullet which we can’t assume.

Even so, we find that the green elements of South Africa’s ERRP still provide a net positive boost for GDP and jobs for the economy as a whole: the gains in other sectors outweigh the losses in coal mining. Currently plans look more like ‘return to normal’: the development, with Chinese investment, of the South Africa Energy Metallurgical Economic Zone in Limpopo province involves construction of a new large coal-fired power station.

We have to recognise that decarbonisation has important socioeconomic and political consequences.  The UK’s history since the 1980s provides a cautionary tale of the long-term impacts on health and well-being in coal communities where no good alternative jobs were available.

Our ‘green push’ scenario continued to find positive net impacts for South Africa’s GDP and jobs, and made a substantial cut in CO2 emissions. But when we looked at the impacts on other natural capital assets, such as water, species, soils and habitats, our decarbonisation policies did nothing to mitigate the trend towards greater degradation.

Less coal mining certainly helps, but that benefit can be outweighed by more quarrying of construction materials. And important areas of economic activity (most obviously agriculture and tourism) depend on the ecosystem services that those assets provide. So we need to put other environmental policies such as circular economy measures in place to decouple growth from damage to the natural environment.

A chance to invest in South Africa’s green potential

South Africa faces major environmental challenges, many of them linked to global warming.

Water scarcity, already a major problem, will be made worse by reduced rainfall and higher evaporation rates. That will pose difficult trade-offs in water resource allocation between urban-industrial use, agriculture and sanitation. Higher temperatures and more variable rainfall will reduce crop yields. Increasing sea levels, coastal storms and acidification of estuaries will diminish fish stock and erode coastal lands.

At the same time, South Africa is among the richest countries in the world in terms of biodiversity, ranking as one of the top ten nations in terms of plant richness and third for marine species endemism. The number of jobs directly related to biodiversity (e.g. biodiversity conservation, tourism, fisheries), is comparable with the number in the mining sector.