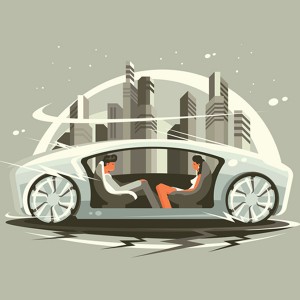 There is a tsunami on the horizon… autonomous vehicles are coming. The impact of this disruptive technology will ripple through the economy affecting our behaviour, our industries and our governments’ policies. The changes will be profound.

Our recent market forecast for the UK’s innovation centre for intelligent mobility (the Transport Systems Catapult) estimates the market for Connected and Autonomous Vehicles (CAVs) in the UK at £28bn in 2035.

This is positive news, however, even if the effects are net positive, policy makers may want to help the ‘losers’ in the transition. For example, job losses among taxi drivers could be substantial.  According to the latest official taxi statistics survey, at the end of March 2017 there were 356,300 taxi or private hire vehicle driver licences in England alone.

Policy makers need to have their tool-kits at the ready. They may need to regulate markets and develop skills for those left unemployed.

An increase in take-up of autonomous vehicles could mean a smaller vehicle fleet. Instead of everyone owning their own car (and leaving it on the driveway or parked at work for most of the time), people could switch to flexible car-sharing and autonomous taxi services, known as “mobility-as-a-service”.

The cost of a taxi fare might drop by a third once the driver’s labour costs are removed – and could drop by more if autonomous vehicles make ride-sharing easy.  This, coupled with a large enough fleet to give rapid availability, makes an automated Uber service start to look very attractive.  The stock of cars would be newer (and each car would have a much higher annual mileage), so new car technology (with lower emissions) would diffuse much more quickly.

Alternatively, if the offer of mobility as a service is not sufficiently cheap and reliable, individuals may prefer to own an autonomous vehicle. Instead of a reduction in the vehicle fleet there could be an increase, especially as it would empower the young, elderly and disabled to travel independently by car.

The industries built up around the sale, financing and advertising of new and second-hand cars for consumers may become obsolete as new business models look to capitalise from autonomous vehicles. Managing fleets of autonomous taxis would open new revenue streams for on-demand mobility offering cost-effective travel for consumers, who would avoid paying a lump sum investment cost and would benefit from low-cost, on-demand travel.

The insurance market will change radically and fall in value as the structure of claims alters, collisions will be less frequent and would be the fault of the technology not the human (currently 90% are caused by human error). Their potential customer base may shrink from insuring millions of individual policies to insuring a few mobility fleet operators or original equipment manufacturers (OEMs).

Online streaming services could offer lucrative packages to autonomous vehicle users for in-car entertainment and there would be a boost to investment in telecommunications services, as vehicles will communicate over mobile networks.

Autonomous vehicles are a hugely disruptive technology. We have thought through some of the implications of their introduction and what policy makers may need to consider in the not so distant future.

CE has developed a model of the European stock of cars, HGVs and buses which, when coupled with the macroeconomic E3ME model, provides a robust tool for assessment of these types of questions.

Find out more about Cambridge Econometrics work on infrastructure and transport.