COP26: Raise the ambition and support a Just Transition 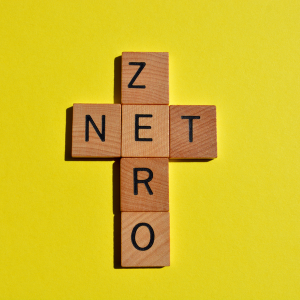 Existing Nationally Determined Contributions (NDCs), that had been submitted before the immediate run-up to COP26, fall a long way short of the required trajectory to keep global warming to ‘well below 2°’.

We estimate that CO2 emissions in 2030 in a 1.5° scenario need to be about half the level implied by the NDCs. 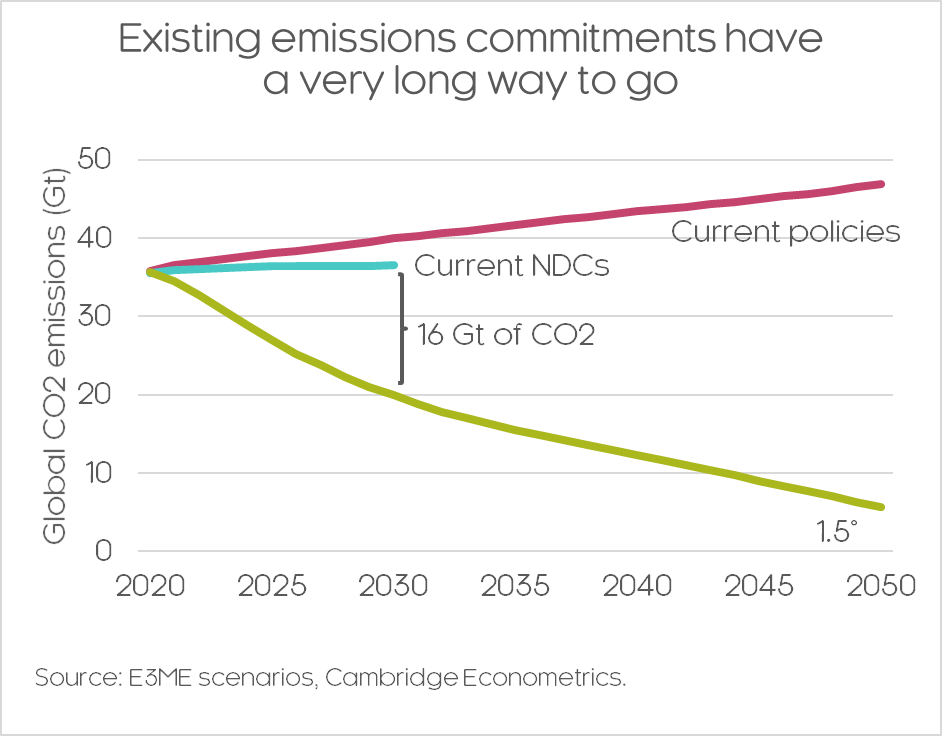 For most countries (all but the largest fossil fuel producing countries), our modelling suggests that decarbonisation can be achieved with the same or higher GDP per capita than under policies that merely meet the NDCs, as green activities replace fossil fuels and investment stimulates innovation. Longer term, of course, the economic and health benefits of limiting the destructive impact of global warming are much greater. 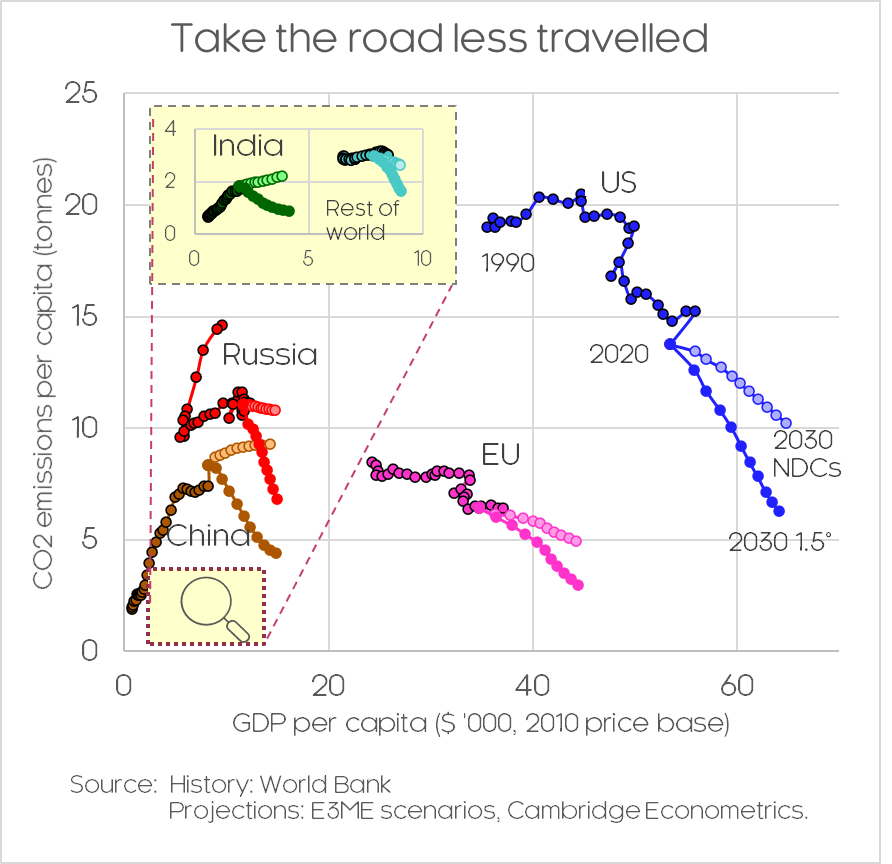 Rich countries like North America that are intensive consumers of fossil fuels will need to make particularly rapid changes to bring per capita emissions more into line with levels elsewhere.

Rapidly-growing countries, most obviously China, will have to commit to cutting emissions per capita rather than just curbing the rapid increase of recent decades. Although their levels are still well below those in North America, that way of using energy is obviously unsustainable.

Our analysis of China’s ‘net zero by 2060’ commitment concludes that decarbonisation will bring net benefits to China’s economy, albeit with substantial structural change and shifts in jobs.

The EU has long had a tradition of relatively high energy costs, partly due to taxes on road fuels, and so its per capita emissions are well below those in North America. But like other rich countries the EU has also outsourced some of its emissions to other countries by importing more of its energy-intensive goods.

Setting the bar for COP26 commitments

The third figure shows how much further countries need to go, compared with the NDCs that had been announced before the lead-up to COP26, to follow the trajectory implied by our 1.5° scenario.

Compared with the likely outturn in 2030 under existing policies (as opposed to commitments not yet backed up by policies), most countries need to commit to a reduction of 40% or so by 2030. That is three times the reduction to which they have committed so far, or more.

One helpful feature of innovation included in our modelling is the virtuous circle triggered by concerted action: greater take-up of new technologies stimulates innovation and cost reductions, which in turn promotes faster take-up. The impact on global emissions of more ambitious country commitments is therefore greater than the sum of those targets. 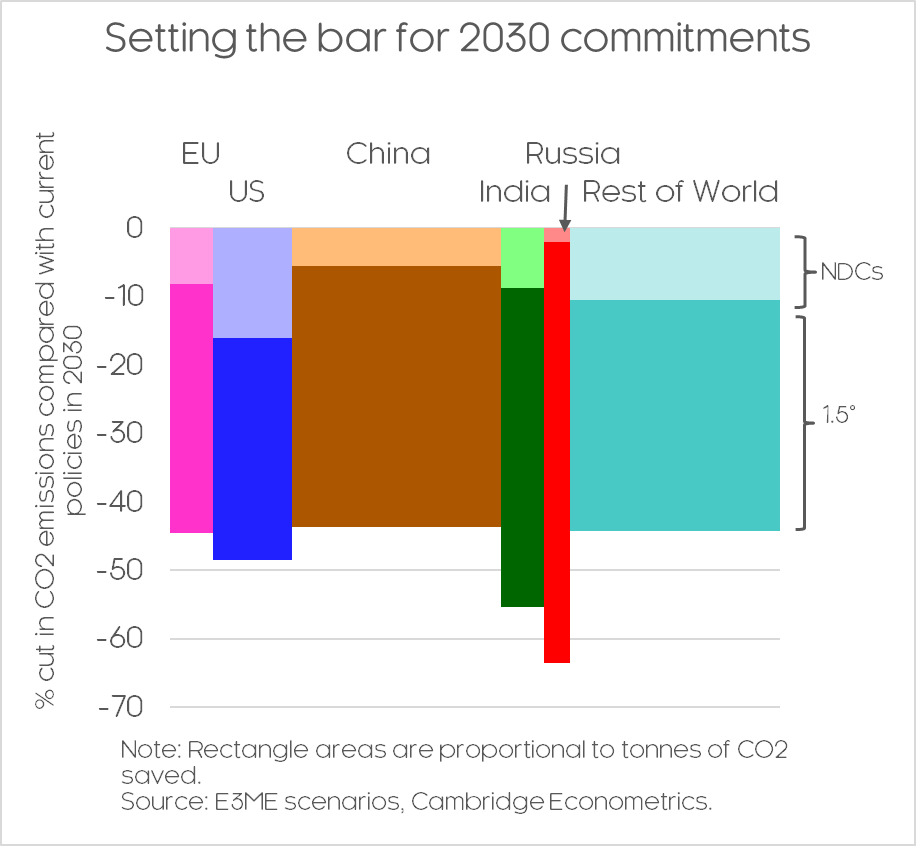 While some important technological challenges are still to be met (low-carbon air transport, dispatchable low-carbon power generation, carbon capture, utilisation and storage), in others there has been very substantial progress with more in prospect (cost reductions in solar PV, wind power and batteries).

The biggest obstacles are socio-political.

The large companies engaged in fossil fuel extraction and processing are a well-established, powerful lobby and an important source of funds for political campaigning and research advocacy. The longer investment continues in these businesses, the greater the asset value at risk of becoming stranded and the more entrenched their opposition to decarbonisation will become.

The workers and communities that depend on fossil fuel jobs have no guarantee that their livelihoods will be supported by alternative work. Local and national governments that rely heavily on fossil fuel tax revenues will see their tax base eroded. While in most countries, we think the gains in GDP and jobs from shifting to a low-carbon society will outweigh the losses, that will be small comfort to those who are most vulnerable to the costs of restructuring.

For reasons of both equity and political feasibility, policies to promote a Just Transition are as important as those targeting decarbonisation.

Click here to sign up to our newsletter to receive clarity from complexity, straight to your inbox.

2 This 1.5° scenario has been developed by using E3ME to model sets of policies, country by country, that collectively cut cumulative CO2 emissions to a carbon budget that has 50% probability of keeping global warming within 1.5° based on simulations with the GENIE climate model (https://source.ggy.bris.ac.uk/wiki/GENIE).

3 When it comes to the contribution of each country to cutting emissions in our 1.5° scenario, we assume that all countries introduce a package of policies in a broadly similar way. The package includes, but goes well beyond, the application of a carbon price, as our modelling finds that some of the behaviour changes and innovation activities that need to happen are quite unresponsive to price signals alone.