Global megatrends and how they impact climate scenario modelling 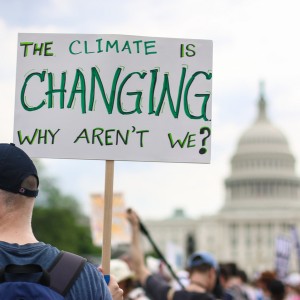 “It’s not what you don’t know that kills you, it’s what you know for sure that just ain’t true”, Mark Twain.

Economist Zsófi Kőműves on why long-term megatrends matter in the context of climate change policies.

How well can we measure the effect of low-carbon policies?

Modelling by Cambridge Econometrics for the European Commission (forthcoming in 2020) and used in a report launched today Working towards a climate neutral Europe: Jobs and skills in a changing world explores how different assumptions on global megatrends – automation, resource shortages, ageing population and deglobalisation – drive baseline and low-carbon economic impacts.

Climate scenario analysis helps us understand what happens to the economy, emissions and climate change under different climate policies.

The starting point for comparing alternative futures driven by policies is to construct a modelling baseline forecast to measure the effects against.

Typically, this baseline is a ‘business-as-usual’ scenario, which assumes the present level of climate action and the continuation of current trends. After setting a baseline forecast, the projected effect of low-carbon policies are routinely presented as differences from baseline.

Therefore, the economic outturn in the scenario depends crucially on the baseline values. For example, if the baseline already includes ‘current policies’ that have an important impact on emissions, a scenario that delivers ‘net zero’ emissions will be reported as having a smaller impact than if the baseline simply extrapolated past trends.

What if the modelling baseline is missing the point?

Macroeconomic forecasts can notoriously go wrong.  Most failed to predict the Great Recession or the scale of the impact of COVID-19.  They have also failed to predict some long-term trends such as the ‘productivity puzzle’ experienced in several countries in the 2010s.

Macroeconomic models can be criticized for their oversimplified assumptions of perfect foresight and rationality (notably in optimization Computable General Equilibrium models) or assuming historically unchanging behavioral parameters (in macroeconometric models such as E3ME).

Forecasting performance fails when these assumptions break down, notably when facing unprecedented shocks and uncertainties. Of course, forward-looking modelling and climate policy-planning have to make simplifying assumptions to cut through the noise.

But as Joseph Stiglitz concluded “the question is (…) what simplifications are appropriate for asking what questions?”.

How can the modelling baseline be improved?

In recent modelling work for the European Commission (forthcoming in 2020) Cambridge Econometrics and E3Modelling re-examined standard baseline modelling assumptions about the evolution of global megatrends.

The research explored how changes in core assumptions result in alternative futures against which the impact of low-carbon policies can be measured. The long-term drivers we focused on were:

How would assumptions on megatrends change the modelling baseline?

The figure below shows the range of GDP projections for the EU27+UK under different assumptions for various megatrends, compared with our ‘standard’ baseline and the associated low-carbon scenario.

By 2050 the difference between the standard baseline and the estimates using more optimistic or pessimistic assumptions on global megatrends could be as large as +/- 10%. 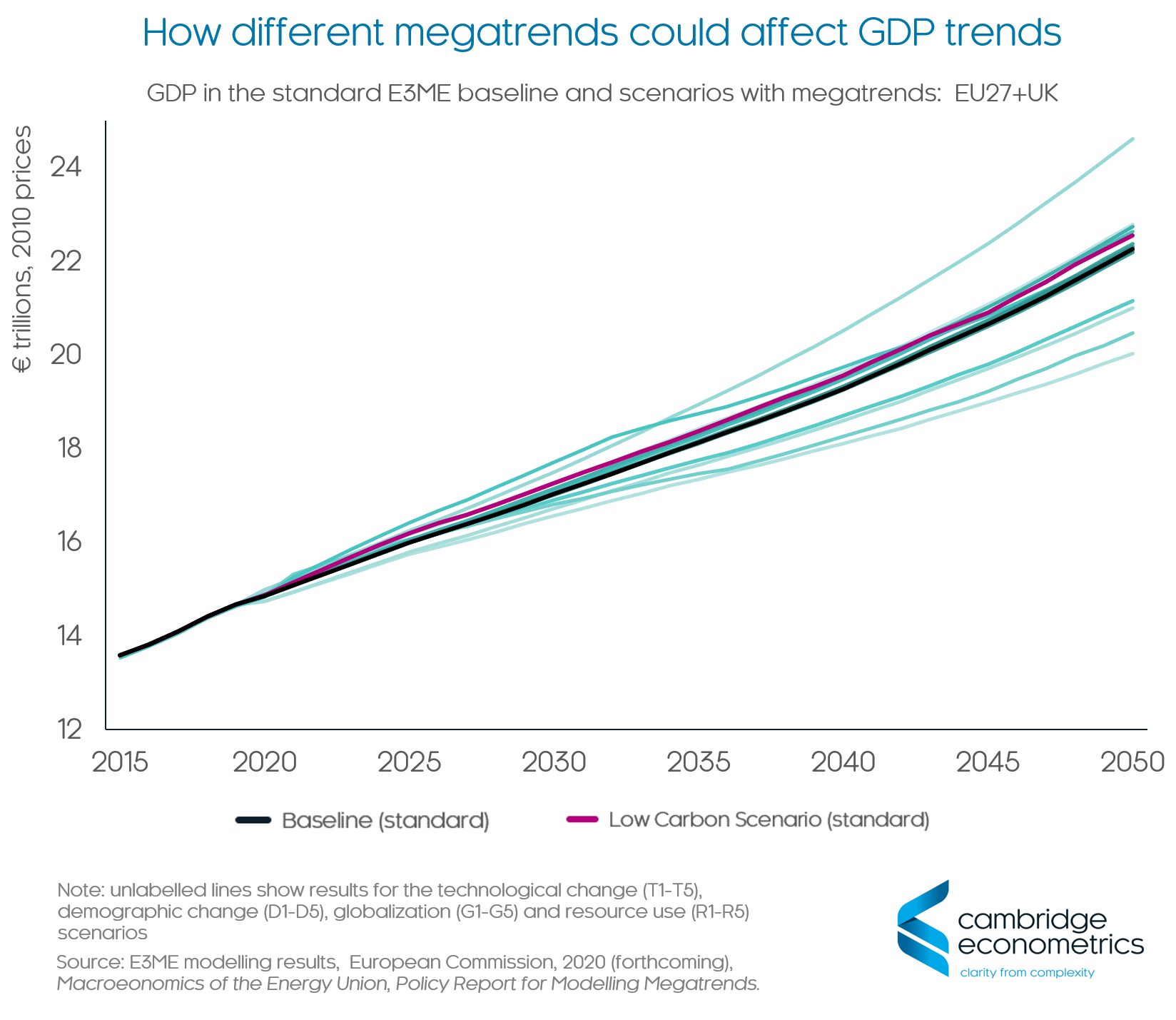 The red line represents the GDP trajectory when low-carbon policies are added to the standard modelling baseline. If one of the more extreme megatrend cases were treated as the baseline, the outcome under the low-carbon scenario could look quite different (even though the ‘impact compared to baseline’ is the same).

Why does all this matter?

Low-carbon policies involve a major structural change to the economy.

In fact, the structural change is far more important than the relatively small scale of the overall macroeconomic change (for countries and regions that are not heavily reliant on fossil fuel production).

But the context in which those structural changes are going on really matters, not least for political feasibility. If there were already substantial disruption to jobs as a result of automation, the additional impacts of low-carbon policies might be resisted fiercely.

The combined effects of megatrends and low-carbon policies

The graph below shows the compound GDP and employment impacts of the megatrends and low-carbon policies by 2050 compared to the standard modelling baseline for the EU27+UK.

Each dot represents the result of a scenario with different assumptions for technological change (T1-T5), demographic change (D1-D5), globalization (G1-G5) and resource use (R1-R5).

The results show that demographic and technological trends are the strongest drivers. Demographic scenarios can have positive and negative impacts, depending on their assumptions on the fertility rate, mortality, migration and welfare policies of the EU.

In E3ME the negative impacts of automation dominate, as employment losses reduce household incomes, consumption and output. Changes in resource efficiency and tariffs have moderate impacts. In this modelling exercise, the compound GDP impacts are mostly driven by the megatrend effects and the low-carbon transition is a more moderate addition. 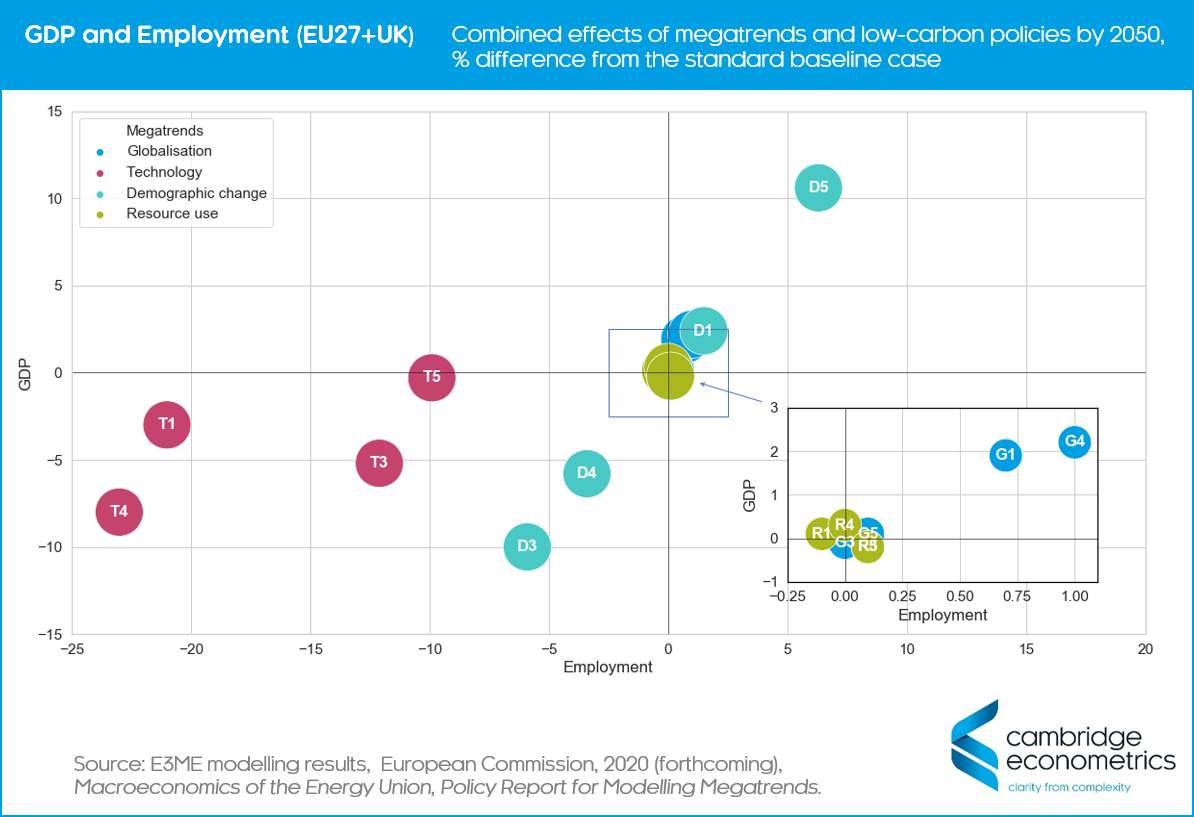 This modelling exercise shows the strong differences in the projections of main economic indicators based on assumptions on global megatrends. It is a powerful reminder of the importance of modelling assumptions and the inclusion of different trends when planning low-carbon policies in a dynamically changing world.

A whole team of economists are involved in this project. They are: Richard Lewney, Dora Fazekas, Hector Pollitt, Unnada Chewpreecha, Bence Kiss-Dobronyi and Xinru Lin.  Please feel free to contact me with any technical queries.